BY JOHN SOLOMON | THE HILL 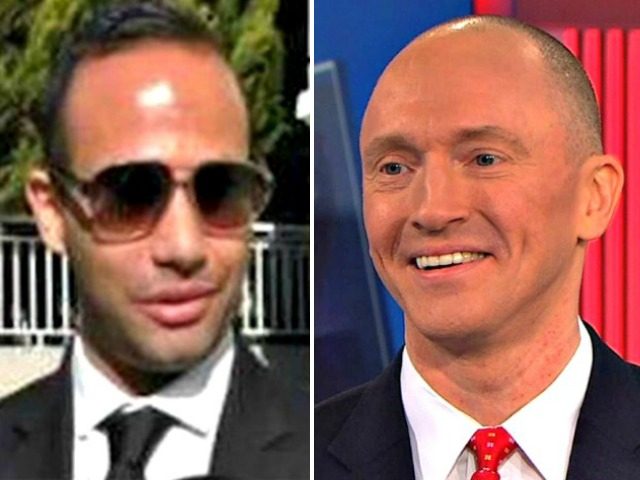 If President Trump declassifies evidence in the Russia investigation, Carter Page’s summer bike ride to a Virginia farm and George Papadopoulos’s hasty academic jaunt to London may emerge as linchpin proof of FBI surveillance abuses during the 2016 election.

The two trips have received scant attention. But growing evidence suggests both Trump campaign advisers made exculpatory statements — at the very start of the FBI’s investigation — that undercut the Trump-Russia collusion theory peddled to agents by Democratic sources.

The FBI plowed ahead anyway with an unprecedented intrusion into a presidential campaign, while keeping evidence of the two men’s innocence from the courts.

Page and Papadopoulos, who barely knew each other, met separately in August and September 2016 with Stefan Halper, the American-born Cambridge University professor who, the FBI told Congress, worked as an undercover informer in the Russia case.

Papadopoulos was the young aide that the FBI used to justify opening a probe into the Trump campaign on July 31, 2016, after he allegedly told a foreign diplomat that he knew Russia possessed incriminating emails about Hillary Clinton.

Page, a volunteer campaign adviser, was the American the FBI then targeted on Oct. 21, 2016, for secret surveillance while investigating Democratic Party-funded allegations that he secretly might have coordinated Russia’s election efforts with the Trump campaign during a trip to Moscow.

To appreciate the significance of the two men’s interactions with Halper, one must understand the rules governing the FBI when it seeks a Foreign Intelligence Surveillance Act (FISA) warrant such as the one secured against Page.

First, the FBI must present evidence to FISA judges that it has verified and that comes from intelligence sources deemed reliable. Second, it must disclose any information that calls into question the credibility of its sources. Finally, it must disclose any evidence suggesting the innocence of its investigative targets.

Thanks to prior releases of information, we know the FBI fell short on the first two counts. Multiple FBI officials have testified that the Christopher Steele dossier had not been verified when its allegations were submitted as primary evidence supporting the FISA warrant against Page.

Likewise, we know the FBI failed to tell the courts that Steele admitted to a federal official that he was desperate to defeat Trump in the 2016 election and was being paid by Clinton’s campaign and the Democratic National Committee (DNC) to gather dirt on the GOP candidate. Both pieces of information are the sort of credibility-defining details that should be disclosed about a source.

What remains uncertain in the court of public opinion is whether the FBI possessed evidence suggesting Papadopoulos and Page — and, thus, the larger Trump campaign — were innocent of collusion. Republican lawmakers have suggested for months that such evidence existed and was hidden from the courts, but none has emerged in public.

My reporting from more than two dozen sources, many with access to the FBI’s evidence, suggests one answer to that question lies in Halper’s interactions with the two Trump campaign advisers, some of it documented in FBI records. And interviews with both men reveal just how much they told Halper about their innocence.

Page, an avid biker, rode his mountain bike on Aug. 20, 2016, to a Northern Virginia farm after being invited there by Halper for a casual Saturday visit. Page met Halper weeks earlier when invited by Halper’s assistant to a Cambridge academic conference. The two corresponded by email around the time of Page’s trip to Moscow and arranged to meet in Virginia.

By the time Page arrived at Halper’s farm, he had been rattled by media calls during the prior week in which reporters alleged having information that Page met with two senior Russian intelligence figures in Moscow. The reporters suggested his trip might have been part of a larger plot to coordinate with Russia to benefit Trump’s election as president.

That allegation, it turns out, was one of many in the uncorroborated Steele dossier guiding the FBI’s collusion probe.

Page told me he was incredulous at the suggestions and told everyone he knew, including Halper, that he had not met either Russian intel figure and knew of no Trump-Moscow coordination.

“I’m certain that nothing I said that day at the professor’s farm could be deemed as anything other than exculpatory. And once again, in September, I explained reality to the FBI. Contrary to the DNC’s false reports, I have never met those Russians, and I did not know of any effort to coordinate, collude or conspire with Russia. Period.”

Page said he went to Moscow in July 2016 simply to give a speech, at the same university where former President Obama spoke a few years earlier. And he said he consciously did not take any actions with Russians that might raise concerns, especially after helping U.S. prosecutors and the FBI in an earlier Russian criminal case and meeting with federal authorities as recently as the previous March.

“I’ve never done anything even vaguely resembling illegality throughout the countless trips to Russia. But I was exceptionally meticulous that trip to carefully avoid anything that could be remotely construed as questionable,” he told me.

Page’s recollection is backed up by a letter he sent to then-FBI Director James Comey a few weeks after his Halper meeting. “For the record, I have not met this year with any sanctioned official in Russia, despite the fact that there are no restrictions on U.S. persons speaking with such individuals,” he wrote in September 2016.

Multiple sources tell me none of the FISA applications the FBI submitted to judges over the course of a year’s surveillance of Page made any mention of exculpatory statements or protestations of innocence that Page made to informants.

If such statements exist, in the form of a tape or a transcript or an FBI interview report — three routine investigative tools the FBI uses when managing informers — then it would be a huge omission that likely violated FBI rules.

A month later, in London, Papadopoulos was paid $3,000 to present a foreign policy paper to Halper. On the second day of his visit with Halper, Papadopoulos said the conversation turned from academic work to a barrage of questions about Russia, Trump and collusion, including whether the Trump campaign had conspired with Russia on the hacked Clinton emails or changed the GOP platform on Ukraine to appease Vladimir Putin.

Papadopoulos told me he pointedly remembers his response: “I made it clear to Halper that what he was suggesting did not only amount to treason, but that I had absolutely no idea what he was talking about and had no information at all about anyone involved with the campaign who might have been involved with a conspiracy because there never was a conspiracy and no one was colluding with a foreign power, especially Russia.

“Furthermore, I made it clear to him that Ukraine should be supported and that Russia will always remain a competitor, even if Trump decided to work with Russia to stabilize Syria and East Ukraine while checking China’s rise.”

Sources familiar with the FISA applications say they contain no evidence that Papadopoulos made exculpatory statements unwittingly to an FBI informer.

Again, if such statements exist in transcripts, tapes or FBI reports, they’re a major omission.

Page never has been charged with wrongdoing. And Papadopoulos, after an exhaustive investigation by special counsel Robert Mueller, was not accused of conspiracy with Russia; instead, he pleaded guilty to making a false statement to the FBI about a months-old conversation with Australian diplomat Alexander Downer regarding a rumor that Russia possessed embarrassing emails from Clinton.

The crime was deemed so minor by the presiding judge that Papadopoulos was sentenced to a mere 14 days in jail.

If Page’s and Papadopoulos’s recollections of what they told Halper are accurate, former FBI officials Comey, James Baker, Andrew McCabe, Lisa Page and Peter Strzok — all of whom played a role in the Russia probe and the FISA warrants — have some serious explaining to do. So does departing Deputy Attorney General Rod Rosenstein, who signed the fourth and final FISA warrant.

My reporting suggests a much bigger scandal — the intentional misleading of the nation’s federal intelligence court — soon may eclipse the Russia narrative that has dominated the media the past two years.

The fastest way to know if that storm is on the horizon is for Trump to declassify the documents showing exactly how the FBI behaved in this case.

John Solomon is an award-winning investigative journalist whose work over the years has exposed U.S. and FBI intelligence failures before the Sept. 11 attacks, federal scientists’ misuse of foster children and veterans in drug experiments, and numerous cases of political corruption. He serves as an investigative columnist and executive vice president for video at The Hill.