Oh, So This Is Why The FBI Couldn't View The Clinton Foundation Emails On Hillary's Unauthorized Server 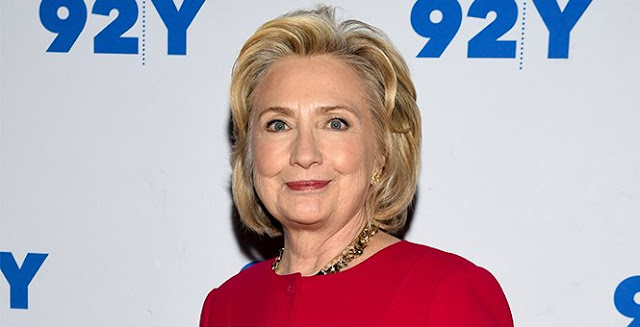 I know it’s a story that isn’t as dominating as the 2020 contenders, the college admission scandal, or the horrific shooting in New Zealand, but the Department of Justice/FBI meddling in the 2016 election is still news.

We all had suspicions that there were top-level folks screwing around. I mean, we just had revelations that top officials at the DOJ were discussing ways to remove Donald Trump through the 25th Amendment.

These people weren’t elected. This was coup talk. Period.

Now, we have ex-FBI lawyer Lisa Page saying that there was an order handed down from the DOJ to the FBI, telling them not to charge Hillary Clinton for mishandling classified information on her unauthorized and unsecured server from which she did all of her officials business when she served the Obama administration as secretary of state.

And now, there was supposedly a deal between the DOJ and the Clinton camp that prevented the FBI from viewing Clinton Foundation emails (via Washington Examiner).

Fired FBI agent Peter Strzok told Congress last year that the agency "did not have access" to Clinton Foundation emails that were on Hillary Clinton's private server because of a consent agreement "negotiated between the Department of Justice attorneys and counsel for Clinton."

That agreement was revealed in newly released congressional transcripts from Strzok's closed-door testimony at the House Judiciary Committee on June 27, 2018.

When asked by then-majority general counsel Zachary Somers if “the Clinton Foundation was on the server”, Strzok testified that he believed it was “on one of the servers, if not the others.” But Strzok stressed that due to an agreement between the DOJ and Clinton, they were not allowed to search Clinton Foundation emails for information that could help in their investigation.

The FBI would have been investigating Clinton's emails in 2016, when former President Barack Obama was still in office and when Clinton was running for president against then-candidate Donald Trump.

Somers asked in the 2018 hearing: “Were you given access to those emails as part of the investigation?”

Strzok replied: “We were not. We did not have access," according to the transcript.

The allegations lobbed at the Clinton Foundation have been pervasive as well, with many noting that it was a virtual slush fund for the power couple. A political favor bank where the wealthy and well connected to drop a donation and could expect very good things to benefit them in their economic lives at some point down the road.

And it wasn’t just liberals who were writing about how this little system was rather slimy.

In August of 2016, Guy noted that the DOJ rejected an FBI request to look into the Clinton Foundation. At the time, who cares, right? Clinton was going to win anyway.

For years, the liberal media and the Democrats have alleged that there was Russian collusion with the Trump campaign to tilt the 2016 election.

So far, there’s been zero evidence to substantiate that allegation that’s rapidly becoming a clown show. It’s embarrassed the media for peddling stories on this beat that was not just straight trash, but totally wrong.

Now, with more light on the FBI, DOJ, and Clinton campaign’s antics, the collusion call is coming from inside the house. Remember the Steele Dossier on Trump that was compiled by ex-MI6 spook Christopher Steele was a Democrat/DNC/Clinton funded the venture.

Lisa Page and Peter Strzok had a months-long extramarital affair in which they shared tens of thousands of anti-Trump texts, alluding to an insurance policy against the then-candidate, worried that the bureau might be going too hard on Hillary during the email probe, with Strzok explicitly saying that they would find ways to stop a Trump presidency. He reportedly was told that the Clinton server may have been breached and did nothing about it.

Strzok was a top counterintelligence agent at the bureau prior to the revelation of these texts. He was transferred to human resources before being fired, but not after he was involved in the Clinton email probe and signed off on the counterintelligence investigation into Russian collusion in July of 2016; an investigation now being helmed by Special Counsel Robert Mueller.

Page resigned, but in a closed-door session with Congress said the anti-Trump texts meant what they said.

This story about the Clinton Foundation emails having a shield thanks to the Obama DOJ shouldn't shock us, but it's part of a pattern.

So, when it comes to collusion, the Robert F. Kennedy and J. Edgar Hoover buildings seem to be a point sources.

https://townhall.com/tipsheet/mattvespa/2019/03/18/more-collusion-clinton-campdoj-deal-prevented-fbi-from-viewing-foundation-emails-on-her-unsecured-and-unauthorized-server-n2543144?utm_source=thdailypm&utm_medium=email&utm_campaign=nl_pm&newsletterad=&bcid=1b87ed489cb499e9d52de389e64c7f01&recip=19399969
Posted by Frances Rice at 9:04 AM