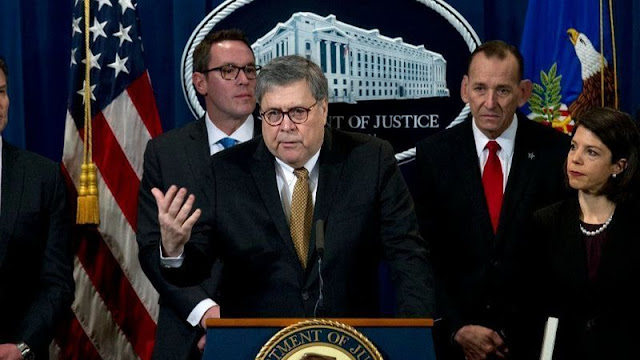 Americans deserve a full accounting of the missteps of Comey and the FBI.
Attorney General William Barr has reported to Congress that special counsel Robert Mueller has cleared President Trump and his campaign team of claims of conspiring with Russia during the 2016 election. This is more than an exoneration. It’s a searing indictment of the Federal Bureau of Investigation, as well as a reminder of the need to know the story behind the bureau’s corrosive investigation.

Mr. Mueller’s report likely doesn’t put it that way, but it’s the logical conclusion of his no-collusion finding. The FBI unleashed its powers on a candidate for the office of the U.S. presidency, an astonishing first. It did so on the incredible grounds that the campaign had conspired to aid a foreign government. And it used the most aggressive tools in its arsenal—surveillance of U.S. citizens, secret subpoenas of phone records and documents, even human informants.

The wreckage is everywhere. The nation has been engulfed in conspiracy theories for years. A presidency was hemmed in by the threat of a special counsel. Citizens have gone to jail not for conspiracy, but for after-the-fact interactions with Mr. Mueller’s team. Dozens more have spent enormous amounts of money and time defending their reputations.

None of this should ever have happened absent highly compelling evidence—from the start—of wrongdoing. Yet from what we know, the FBI operated on the basis of an overheard conversation of third-tier campaign aide George Papadopoulos, as well as a wild “dossier” financed by the rival presidential campaign. Mr. Mueller’s no-collusion finding amounts to a judgment that there never was any evidence. The Papadopoulos claim was thin, the dossier a fabrication.

Which is all the more reason Americans now deserve a full accounting of the missteps of former FBI Director James Comey and his team—in part so that this never happens again. That includes the following: What “evidence” did the FBI have in totality? What efforts did the bureau take to verify it? Did it corroborate anything before launching its probe? What role did political players play? How aware was the FBI that it was being gulled into a dirty-trick operation, and if so, how did it justify proceeding? How intrusive were the FBI methods? And who was harmed?

If Mr. Mueller has done his job properly, his report will address some of this. His team would have had to look into the sources of the allegations as part of determining the documents’ (lack of) veracity. A Mueller report that doesn’t mention the dossier and its political provenance, or questionable news stories used to justify surveillance warrants, for instance, is a report that is playing politics.

The fuller accounting will come only through total disclosure of FBI and Justice Department probe documents. Mr. Trump promised that disclosure in September but has yet to follow through. That transparency is now a necessity. The Mueller report is only half the story. With the special-counsel probe at an end, it’s time to go back to the beginning—to the documents that explain its origin. Only then will Americans have the full story of the Russia-collusion narrative.