ALERT: Goodlatte, Gowdy, and Nunes on the Comey Memos 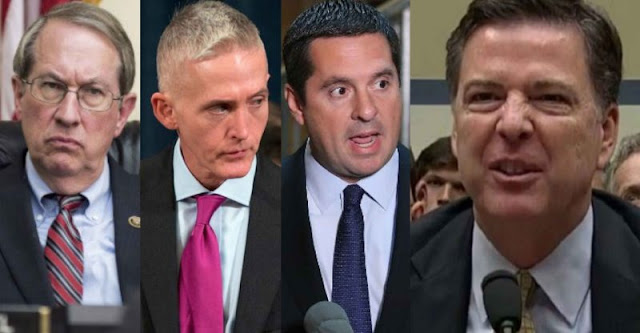 We have long argued former Director Comey’s self-styled memos should be in the public domain, subject to any classification redactions. These memos are significant for both what is in them and what is not.

Former Director Comey’s memos show the President made clear he wanted allegations of collusion, coordination, and conspiracy between his campaign and Russia fully investigated.

The memos also made clear the ‘cloud’ President Trump wanted lifted was not the Russian interference in the 2016 election cloud, rather it was the salacious, unsubstantiated allegations related to personal conduct leveled in the dossier.

While former Director Comey went to great lengths to set dining room scenes, discuss height requirements, describe the multiple times he felt complimented, and myriad other extraneous facts, he never once mentioned the most relevant fact of all, which was whether he felt obstructed in his investigation.

The memos also make certain what has become increasingly clear of late: former Director Comey has at least two different standards in his interactions with others.

It is significant former Director Comey made no effort to memorialize conversations with former Attorney General Lynch despite concerns apparently significant enough to warrant his unprecedented appropriation of the charging decision away from her and the Department of Justice in July of 2016.

These memos also lay bare the notion that former Director Comey is not motivated by animus. He was willing to work for someone he deemed morally unsuited for office, capable of lying, requiring of personal loyalty, worthy of impeachment, and sharing the traits of a mob boss. Former Director Comey was willing to overlook all of the aforementioned characteristics in order to keep his job. In his eyes, the real crime was his own firing.

The memos show Comey was blind to biases within the FBI and had terrible judgment with respect to his deputy Andrew McCabe.

On multiple occasions he, in his own words, defended the character of McCabe after President Trump questioned McCabe.

As we have consistently said, rather than making a criminal case for obstruction or interference with an ongoing investigation, these memos would be Defense Exhibit A should such a charge be made. 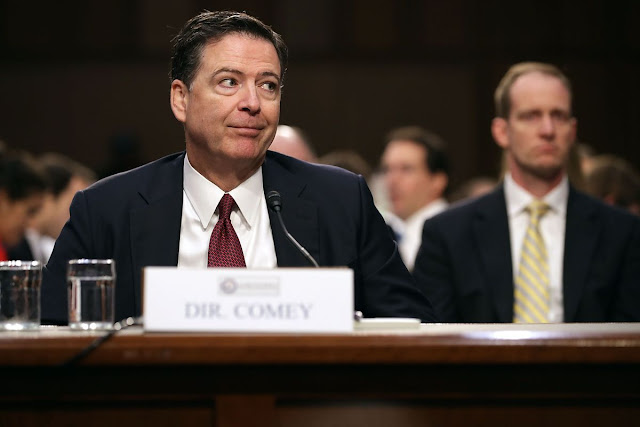 Responding to long-standing requests from congressional committees reiterated this week, the Department of Justice has finally released redacted copies of the seven memos drafted by former FBI Director James Comey summarizing his conversations with Donald Trump. The department is expected to deliver unredacted versions of the memos to the committees on Friday via a secure transfer.

Although he prepared the memos in the course of his professional duties as FBI Director, Comey took the memos with him when President Trump fired him. Although four of the memos contained classified information (according to Senator Grassley), Comey gave four of the seven memos to his Columbia Law School friend (later identified as his alleged lawyer) Daniel Richman for the purpose of leaking the contents to the New York Times. The identification of possible criminal and professional misconduct committed by Comey implicit in the facts and the memos make a good law school exam in any number of courses.

President Trump is not only more sinned against than sinning. He emerges unscathed. That’s my take. Not so Comey.

I have uploaded the memos posted by the New York Times with its story and embedded them below via Scribd. There is much more to be said, but I invite interested readers to take a look with your own eyes.

Quotable quote: “I don’t do sneaky things. I don’t leak. I don’t do weasel moves.”

Below are two pages of the Comey Memos posted on Scribd: 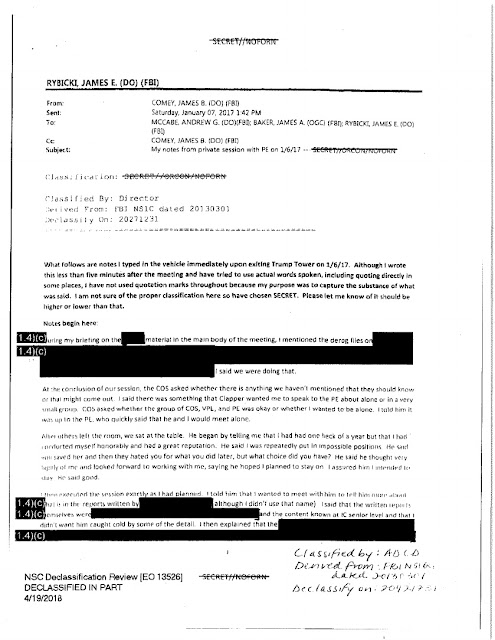 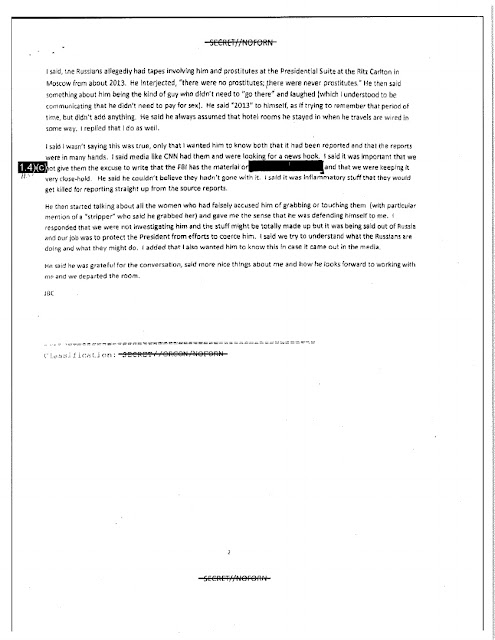 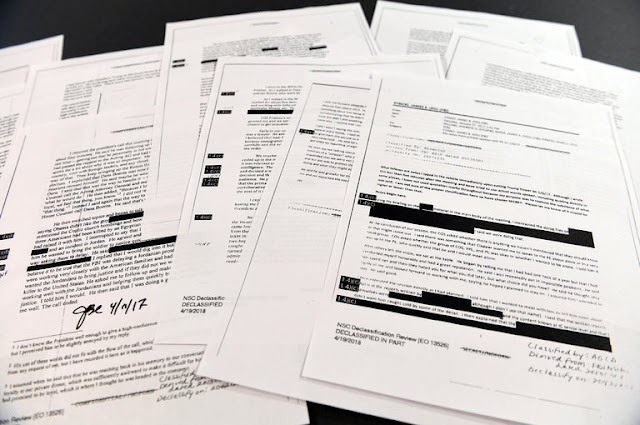 Memos drafted by former FBI Director James Comey, recounting several conversations he had with President Trump before getting fired last spring, tell of a man obsessed with an intelligence dossier containing salacious allegations about his ties to Russia and securing loyalty from those who worked in his administration.

The memos were sent to Congress Thursday evening after top Republican committee chairmen demanded the Justice Department hand them over, and in short order they were shared with the media, intensifying a heated debate on the special counsel investigation and leaks.

The Washington Examiner obtained the 15 pages of redacted memos which document the seven conversations Comey had with Trump from Jan. 7, 2017, through April 11, 2017.

In his notes, Comey wrote about how Trump repeatedly broached the topic of the Trump dossier, a salacious and largely unverified document written by ex-British spy Christopher Steele and partially funded by the Democratic National Committee and Hillary Clinton's campaign, which asserted that Russia had leverage on Trump with damaging information.

That included the "Golden Showers thing," a reference to an alleged encounter at a hotel in Moscow where he ordered Russian prostitutes to pee on a bed used by former President Barack Obama and his wife, Michelle Obama.

“The President said ‘the hookers thing’ is nonsense but that Putin had told him ‘we have some of the most beautiful hookers in the world,’” Comey wrote about at one point, referring to Russian President Vladimir Putin.

Comey recalled Trump griping in January 2017 about the "serious judgment issues" of then-former national security adviser, Michael Flynn, who soon after resigned under pressure and later pleaded guilty in federal court for to lying to the FBI about his contacts with then-Russian Ambassador Sergey Kislyak.

Amid banter about cracking down on leaks, Trump quipped about throwing journalists in jail, according to a February 2017 memo.

The notes were also telling about Comey himself, who claimed he once told Trump, "I don't do sneaky things, I don't leak, I don't do weasel moves."

Despite this assurance, Comey did leak at least one memo to a professor friend of his shortly after he was fired in May. The professor then shared its contents with the New York Times. Comey later testified that he had hoped this would lead to the appointment of a special counsel to investigate Russian meddling in the 2016 election. He got his wish with Robert Mueller.

Comey's leaking has become the center of a debate in Washington about whether he acted improperly and created unsound footing for the special counsel probe.

"Tragedy that a special counsel investigation was launched by leaking of the memos (which Comey has admitted). No basis in the memos to trigger a criminal investigation & it is to the discredit of [Deputy Attorney General Rod] Rosenstein that he caved to the pressure of the media/Democrats & appointed Mueller," tweeted Rep. Ron DeSantis, R-Fla., Thursday evening.

He also declared Thursday evening that the memos show his 2016 campaign did not collude with Russia -- something which Mueller's team is examining -- and proves he did not attempt to obstruct justice.

"James Comey Memos just out and show clearly that there was NO COLLUSION and NO OBSTRUCTION. Also, he leaked classified information. WOW! Will the Witch Hunt continue?" Trump tweeted.

Despite the uproar, the memo in question in which Comey recalls Trump asking him to back off the investigation into Flynn, is marked unclassified -- a point that is lost among some Republicans, argued former Justice Department spokesman Matt Miller on MSNBC late Thursday.

"That memo was actually unclassified and that's important because this has been the subject of a good bit of dispute, a good bit of criticism from Republicans on the hill who tried to argue that he leaked classified information by doing so," he said.

Following the leak of the memos, the three Republican chairmen who led the push to secure Comey's notes, accused the former FBI director of harboring a bias against Trump, which they said was evident by his decision not to memorialize his conversations with other top officials, including former President Barack Obama, former Attorney General Lynch, former Secretary of State Hillary Clinton, his former deputy, Andrew McCabe.

McCabe was fired last month after being found to have repeatedly "lacked candor" about the authorization of leaks to the media by a recently released Justice Department inspector general report.

Pushing back against the Republican front was Rep. Elijah Cummings, D-Md., the ranking member of the oversight panel. He hailed Comey's memos as providing "strong corroborating evidence of everything he said about President Trump — that the President wanted his personal loyalty, that he wanted to end the Russia investigation, and that he wanted Michael Flynn to walk."

Noting that Comey's account was corroborated by handwritten notes from another top DOJ official at the time, Dana Boente, Cummings said, “President Trump’s interference was a blatant effort to deny justice, and Director Comey was right to document it as it happened — in real time.”

The memos' public unveiling came just days after the release of Comey’s book, A Higher Loyalty: Truth, Lies, and Leadership, which recounts his experiences working at the FBI and expands his side of the story about his relationship with Trump.

As part of the accompanying book tour and TV interview blitz, Comey sat down with MSNBC's Rachel Maddow, who grilled him about the memos right after they were leaked Thursday evening.

Comey mentioned he hadn't had access to his memos in a while and couldn't recall if they mentioned anything significant that was mentioned in his book. He told Maddow that, with the leak of his memos, he was "Okay with transparency," and said he assumes the DOJ "went through the steps to make sure that it wasn't jeopardizing an ongoing investigation."

He admitted that writing these memos was not something an FBI agent would normally do, but he noted he was director and not an agent.

Comey also explained why he felt the need to write memos of his interactions with Trump, mentioning he was worried about speaking alone with the president about "things that were relating to him and to the FBI's core responsibilities" and "given the nature of the person, as I understood the president-elect, he might not tell the truth about those if it ever became an issue."