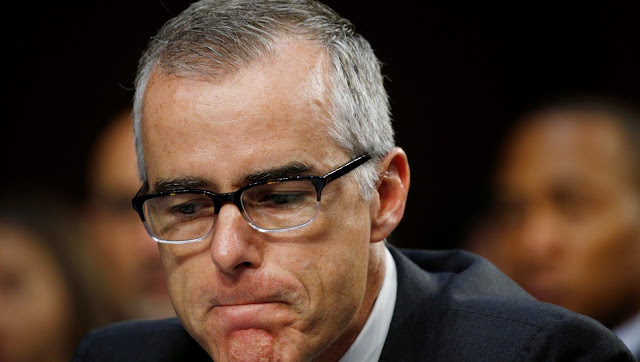 The Department of Justice’s inspector general released an explosive report Friday that led to the firing of former FBI Deputy Director Andrew McCabe for his leaks to the media ahead of the 2016 election.

Inspector General Michael Horowitz, appointed to the post by President Obama, had been reviewing the FBI and DOJ’s actions leading up to the 2016 election. On Friday, the IG published a separate report on McCabe's actions related to leaks about the FBI's probe into the Clinton Foundation, which said that McCabe misled investigators about leaks and did so in a way that did not fall under a "public interest" exemption.

"[W]e concluded that McCabe’s decision to confirm the existence of the CF Investigation through an anonymously sourced quote, recounting the content of a phone call with a senior Department official in a manner designed to advance his personal interests at the expense of Department leadership, was clearly not within the public interest exception," the report says.

McCabe was fired last month by Attorney General Jeff Sessions just days before he would have been eligible for a lifetime pension after it was determined that he misled investigators reviewing the bureau’s probe of Hillary Clinton’s email server.

Sessions said that McCabe “made an unauthorized disclosure to the news media and lacked candor − including under oath − on multiple occasions.”

The report on McCabe found that McCabe authorized a leak to a Wall Street Journal reporter about the contents of a telephone call in August 2016.

"Among the purposes of the disclosure was to rebut a narrative that had been developing following a story in the WSJ on October 23, 2016, that questioned McCabe’s impartiality in overseeing FBI investigations involving [Clinton], and claimed that McCabe had ordered the termination of the [FBI's Clinton Foundation investigation] due to Department of Justice pressure," the report says.

That leak confirmed the existence of the probe, which then-FBI Director James Comey had until then refused to do so. The report says that McCabe "lacked candor" in a conversation with Comey when he said that he had not authorized the disclosure and didn't know who did.

The IG also found that he also lacked candor when questioned by FBI agents on multiple occasions since that conversation, where he told agents that he did authorize the disclosure and did not know who did.

McCabe has denied doing anything wrong and described the push against him as an attempt to slander him.

"This attack on my credibility is one part of a larger effort not just to slander me personally, but to taint the FBI, law enforcement, and intelligence professionals more generally," McCabe said in a statement after his firing.

"The core weakness of the OIG report is the lack of any understandable motive for his alleged wrongdoing. It is undisputed that Mr. McCabe was one of three senior FBI officials authorized to share information with the media, including on sensitive investigative matters," he said.

"He chose to exercise that authority in October 2016, during one of the most turbulent periods in the history of the Bureau, with the knowledge of Director Comey and other senior members of FBI management. His purpose was to protect the institutional reputation of the FBI against false claims, including that a sensitive investigation was being shut down for political reasons."

McCabe and Bromwich seemingly sought to diminish the credibility of former FBI Director Comey, blasting his "recollection" as "not at all clear."

McCabe has been in the news since his firing, particularly over a GoFundMe campaign which raised more than $500,000 for a legal defense fund.

McCabe also wrote a dramatic op-ed for The Washington Post in which he again denied that he lied or misled investigators, and talked about the humiliation he had undergone over the probe and way he was fired.

“Not in my worst nightmares did I ever dream my FBI career would end this way,” he wrote.