The Future of America’s Economy Looks a Lot Like Elkhart, Indiana 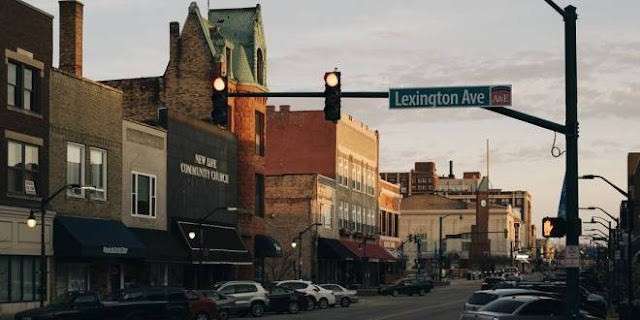 A downtown street in Elkhart, Ind., Photo by David Kasnic

The capital of RV manufacturing, which once had the worst unemployment rate in the U.S., is now facing labor shortages and rising home prices and wages
ELKHART, Ind.—The self-proclaimed RV capital of the world gives a glimpse of what the American economy looks like when operating at full tilt.

High-school students around here skip college for factory jobs that offer great pay and benefits. For-hire signs sprout like roadside weeds. And workers are so flush that car dealers can’t keep new pickups on the lot.

At the same time, the strains are showing. Employers can’t hang on to employees, and house prices are zooming. The worker shortage prompted a local Kentucky Fried Chicken restaurant to offer $150 signing bonuses. A McDonald’s failed to open for lunch last fall because managers couldn’t corral enough hands at $8 an hour to serve the lines waiting at the door. 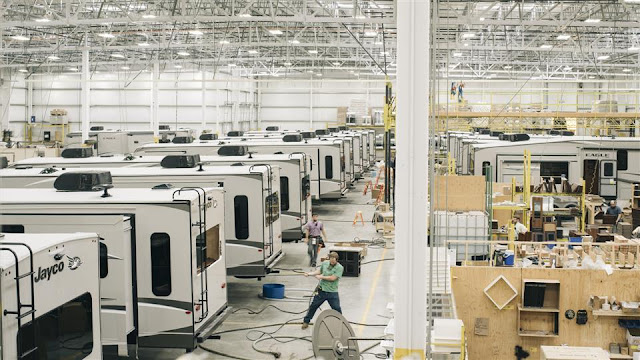 From Bust to Boomtown: Life in a Comeback City, Photo by David Kasnic

Elkhart, Ind., was once the poster child for the recession. Now the economy is booming thanks to strong sales of RVs, the main industry here. And that's created a new challenge: a shortage of qualified workers.

No place in the U.S. has seen a labor-market turnaround like this metropolitan region of 110,000 workers, a mix of blue-collar whites, Mexican immigrants and Amish. “It’s like 1955,” said Michael Hicks,  a Ball State University economist. “If you show up and have minimal literacy skills, you can find a job here.”

Elkhart has unique economic conditions—its good fortune is tied to a central role in the revival of the recreational-vehicle market, where neither automation nor foreign competition is a threat. But as the U.S. turns the page on a decade of postcrisis underemployment, the region points to a future of labor shortages and fights over workers.

The jobless rate in the Elkhart region plunged from 20% in March 2009, worst in the U.S., to just over 2% in January, half the national average.

The local unemployment rate is actually closer to zero: some 9,500 jobs have no takers. Each day, about 25,000 workers commute into Elkhart city, population 50,000. A county economic development agency is hunting for job candidates across Appalachia and as far as Puerto Rico.

The local jobs rebound is the largest among 403 metro areas analyzed for The Wall Street Journal by Moody’s Analytics. As the national unemployment rate drops toward 4%, the Elkhart region has been at that level or below for 34 consecutive months. The rest of the U.S. might never match Elkhart’s sizzling pace, but the region could show what lies ahead.

Average weekly wages overall were up 6.3% in the third quarter of 2017 from a year earlier, the Labor Department said, compared with a 0.6% decline nationally over the same period. In Elkhart’s RV industry, which employs 12% of local workers, average annual salaries in 2016 rose 17% to $68,000. Pay is still going up.

Chasing scarce workers has fueled inflation elsewhere. Median home prices have risen about 6.5% annually over the past two years, said Gary Decker, former president of Elkhart County’s board of Realtors, about twice as fast as in past recoveries.

Elkhart city, located at the junction of the St. Joseph and Elkhart rivers, is booming in a conservative Midwestern way, said Arvis Dawson, a former Elkhart city council member: “People here make enough money to buy a Cadillac, but they buy Chevys.”

Not at Zeigler Ford. The dealership usually stocks a half-dozen Ford Expeditions, which sell for as much as $85,000, and Lincoln Navigators that top out at $95,000. In February, the pricey SUVs were sold out. The Ford dealer, which usually stocks 20 to 30 top-end F-150 pickups, had three on the lot.

“All the high-line series have taken off,” said Mike Simmons, a sales manager. The tight labor market has created problems in his own office, which is short a full-time worker. The dealership is making do with three part-timers.

Jayco Factory 44 looks like a giant woodworking shop, punctuated with the rat-tat-tat of staple guns firing and the buzz of electric saws. The site, which produces $475,000 Entegra motor homes, belongs to Thor Industries Inc.

Amish ride their bicycles for the 5 a.m. start of the workday and head home to farms by 1 p.m. Thor, the region’s largest employer, takes extraordinary steps to locate workers. The company seeks prospects in Youngstown, Ohio, and other Midwestern cities with higher unemployment. It also hires county jail inmates in work-release programs.

Looking ahead, the company invites eighth-grade students to visit its plants, and sends finished RVs to tour area grade schools.

The RV industry sets wages at levels others find hard to match: Eight of Elkhart’s 10 largest employers make RVs or RV parts. Workers are paid based on units produced. At full production, that translates to as much as $90,000 a year for assembly workers at RV plants and $100,000 for foremen.

The work is tough. The posting for an assembly job at LCI industries says the work “requires walking, bending, kneeling, stooping, crouching, crawling and climbing all day,” plus lifting “items over 50 pounds.”

Older workers gravitate to less demanding jobs at other RV firms that make parts and where the base pay is around $15 to $20 an hour.

Lamont Blackwell, the manager of a local McDonald’s restaurant, said he used to work at LCI for more money. “I have thought about going back, but I can’t keep up,” he said. “I’m 40 years old, and my body is breaking down.

Employees job-hop frequently in this workers’ market. Turnover in the RV industry is roughly 100%, according to local manufacturers. Bonuses of $500 to $1,000 are commonly offered to new hires if they stay 90 days.

Rick Collins, president of Cleer Vision Windows Inc., which makes windows for RVs, said that so few people stick around for three months that he pays a $100 bonus for finishing four weeks. The company buses in workers from out of town and generally doesn’t require any pre-employment drug testing.

Mr. Collins also hires laborers from work-release programs. He said demand is so high that even inmates are hard to retain as workers after their release.

The Elkhart metro region operates like an oil economy—a Kuwait in the cornfields—said Enrico Moretti, a University of California, Berkeley, economist.

When bad times hit, they hit hard. In 2009, RV sales fell by half, and so did RV employment. Organizers canceled the Elkhart RV show, the first time in more than 50 years.

Signs of decline during the recession were stark. Mr. Collins, of Cleer Vision Windows, employed about 40 people in 2009 and wasn’t hiring any more.

Even so, he said, day after day, another 40 or so people lined up in his lobby and out the door, to fill out applications.