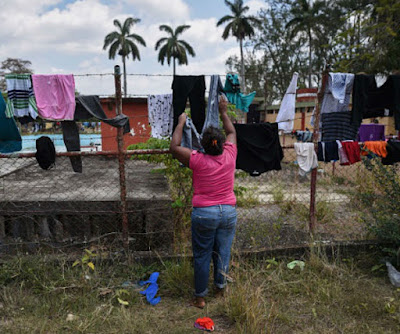 A Central American migrant takes part in a caravan called 'Migrant Via Crucis' towards the U.S., and hangs clothes to dry in Matias Romero, Oaxaca State, Mexico, on April 3, 2018.

President Trump lashed out in fury on April 2 over immigration.

A caravan of an estimated 1,500 future illegal aliens from Central America is marching across Mexico on its way to sanctuary cities in the United States.

You can bet that Gov. Jerry Brown, D-Calif., the two Democratic U.S. senators from California — Diane Feinstein and Kamala Harris — Libby Schaaf, the Democratic mayor of Oakland, Democratic Party leaders in the Congress and progressives throughout the nation will welcome them with open arms.

Included in this illegal alien cheering squad is the National Association for the Advancement of Colored People (NAACP). It's just shown that it has forsaken its original black constituency and become a wholly owned subsidiary of the Democratic party and its open borders lobby, which welcomes the illegal immigrant invasion.

The NAACP has filed a lawsuit against the federal government over its decision to include a question on citizenship in the 2020 Census form. It argues that the addition of a citizenship status question will lead to an undercount of minority and immigrant communities, and that it will misrepresent true U.S. population.

As a black American, I say "Yes" to whether such a question should be included.

April 4 of this year will mark the 50th anniversary of the assassination of the Rev. Dr. Martin Luther King, Jr. Black Americans have paid in blood, and the nation fought a Civil War over their right to citizenship. Something which was not gained until the adoption of the 13th Amendment ending slavery and the 14th Amendment which guaranteed their citizenship.

Therefore, black Americans should have no problem with any census question on citizenship. They should respond with a resounding "Yes," meaning that "you are right I am an American citizen — my ancestors were brutalized and murdered for that right!"

Unfortunately, the National Association for the Advancement of Colored People (NAACP) feels otherwise.

It is not alone.

California has filed a similar lawsuit. New York Attorney General Eric Schneiderman said he will follow and initiate a multi-state lawsuit; and, at least 10 other states have announced they would join his suit.

Why are they so concerned?

They fear that a citizenship question will deter illegal immigrants from participating and decrease the numbers used to determine congressional representation and how billions of federal dollars are allocated.

As NAACP President Derrick Johnson said at a National Press Club press conference in Washington, D.C., "We know , , , that the under-counted African-American Latino community has been a persistent problem across the country."

Since when has the mandate of the NAACP been expanded to represent the Latinos?

Isn’t that what Hispanic civil rights and advocacy organizations are charged with doing?

When was the last time any Hispanic advocacy group, or for that matter, any liberal white group — or even the NAACP — demanded intervention from the Department of Justice (DOJ) to address the ongoing slaughter of black youths in Chicago, South Florida, Baltimore, and other cities?

This entire crusade against inclusion of a question on citizenship is merely an attempt to protect illegal immigrants and make sure that sanctuary and other cities with large numbers of illegals, including criminals, do not lose federal funds or congressional representation.

As I have written in this space on numerous occasions, blacks and legal Hispanic immigrants are economically harmed by illegal immigration and open borders policies.

At a time when black unemployment rates are at historic lows, here comes the NAACP assisting those working to make sure that as many illegal immigrants, including criminals, get into our country as possible. The result: they take low skilled jobs; burden taxpayers with increased education and healthcare costs; and, will be recruited to become Democratic voters — by fraud or any other means.

When was the last time a mayor warned their black communities when feds were going to conduct operations against criminals in the black community as the mayor of Oakland is doing to protect illegal immigrant criminals in her city?
Wake up blacks. You are no longer the favored minority.

Democrats and the NAACP are telling you to "move to the back of the political bus" which now only stops for illegal aliens.

Does anyone think that Democratic leaders would be as protective of illegal aliens and the criminals among them if they were from Haiti or Africa?

Clarence V. McKee is president of McKee Communications, Inc., a government, political, and media relations consulting firm in Florida. He held several positions in the Reagan administration as well as in the Reagan presidential campaigns. He is a former co-owner of WTVT-TV in Tampa and former president of the Florida Association of Broadcasters. Read more of his reports — Go Here Now.
Posted by Frances Rice at 9:31 AM