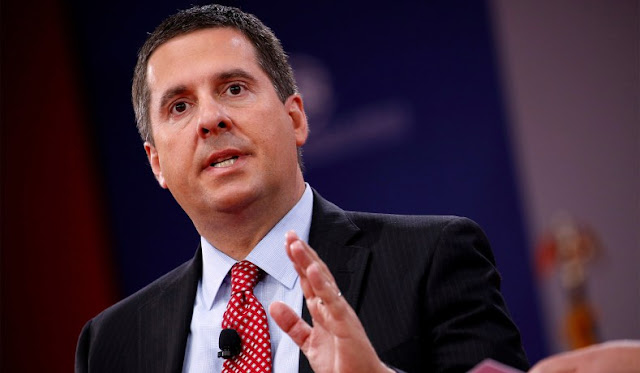 House Intelligence Committee Chairman Devin Nunes said Sunday his review of FBI and Justice Department “electronic communication” documents shows no intelligence was used to begin the investigation into possible collusion between the Trump campaign and Russia during the 2016 election.

“We now know that there was no official intelligence that was used to start this investigation. We know that Sidney Blumenthal and others were pushing information into the State Department. So we’re trying to piece all that together and that’s why we continue to look at the State Department,” Nunes told Maria Bartiromo on “Sunday Morning Futures.”

Nunes, R-Calif., cited the Five Eyes agreement as a way of knowing no intel was used. The U.S., along with Canada, the U.K., Australia and New Zealand, make up the “Five Eyes,” or countries that share intelligence in a more-trusted fashion than other arrangements, like NATO, particularly due to years of trust and a common language.

“We are not supposed to spy on each other’s citizens, and it’s worked well,” he said. “And it continues to work well. And we know it’s working well because there was no intelligence that passed through the Five Eyes channels to our government. And that’s why we had to see that original communication.”

The California Republican said he is now investigating the State Department due to signs of “major irregularities,” in an effort to figure out how information about former Trump campaign adviser George Papadopoulos – who reportedly met with a foreign policy expert and Cambridge professor with connections to the CIA and Britain’s MI6 in London in 2016 – was obtained by the FBI.

Still, Nunes doesn’t know whether the former secretary of state and then-Democratic challenger to Trump in the election, Hillary Clinton, was pulling the strings of the investigation launched against her political opponent. However, he said it is known that two long-time Clinton associates – including Sidney Blumenthal – were “actively” giving information to the State Department, which “was somehow making its way to the FBI.”

Adam Schiff, a California Democrat and ranking member of the House Intelligence Committee, responded to Nunes’ comments on Sunday, calling the information regarding Papadopoulos which led to the initiation of the investigation “well-founded.”

“The majority seems to believe that if it can discredit the initiation of the investigation by attacking the FBI, Justice Department and State Department, it can get the public to ignore the growing body of evidence of illicit contacts between the Trump campaign and the Russians. This approach is as disingenuous as it is destructive to our institutions,” Schiff said in a statement to Fox News.