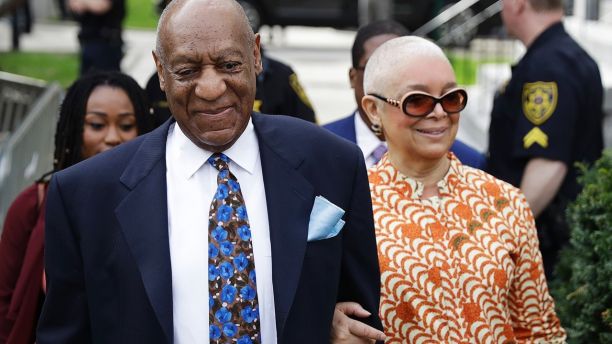 Legendary comedian Bill Cosby was found guilty Thursday of drugging and assaulting a woman, capping off the star's slow demise that began in 2014 when dozens of women began accusing the TV icon of sexual assault.

After 14 hours of deliberations, the jury reached a verdict around 1:30 p.m. ET and determined Cosby was guilty on three counts of felony aggravated indecent assault. The comedian initially had no visible reaction in the courtroom as his fate was announced, but upon hearing the district attorney's request that his bail be revoked he launched into an expletive-laden rant.

The moment happened when District Attorney Kevin Steele argued Cosby's bail was not high enough. It prompted the comedian, who once called out Eddie Murphy for using curse words in his act, to push away his lawyer's hand and shout that he does not have a private plane and then refer to Steele with an expletive.

"I'm sick of him!" Cosby shouted at Steele. The request to have his bail revoked was denied.

Cosby's lawyer, Tom Mesereau, told reporters outside the courthouse: "We don't think Mr. Cosby is guilty of anything and the fight is not over."

When asked by reporters if the defense team plans to appeal the verdict, an annoyed Mesereau replied, "Yes, yes. Very strongly."

Earlier, celebrity attorney Gloria Allred, who represented some of Cosby's accusers, raved on the courthouse steps, "Justice has been done! ...We are so happy that finally, we can say women are believed and not only on #MeToo, but in a court of law."

His chief accuser, Andrea Constand, remained stoic as the verdict was read. Shrieks erupted in the courtroom and some of his other accusers cried.

Constand opted not to speak after the verdict but her lawyer, Dolores M. Troiani ,told reporters at a press conference, ""I am so happy today that I can say that although justice was delayed, it was not denied."

An emotional Steele also spoke at the press conference saying, "We're finally in a place to say that justice was done."He added, "Andrea Constand came here to Norristown for justice and that's what 12 jurors from Montgomery county provided her...and now we really know today...who the real Bill Cosby was."

Cosby could get up to 10 years in prison and a $25,000 fine on each of the three counts. He is likely to get less than that under state sentencing guidelines, but given his age, even a modest term could mean he will die behind bars.

The once-celebrated TV icon was found guilty of violating Andrea Constand at his suburban Philadelphia home in January 2004.

Judge Steven O'Neill thanked the jury saying, "You have sacrificed much." 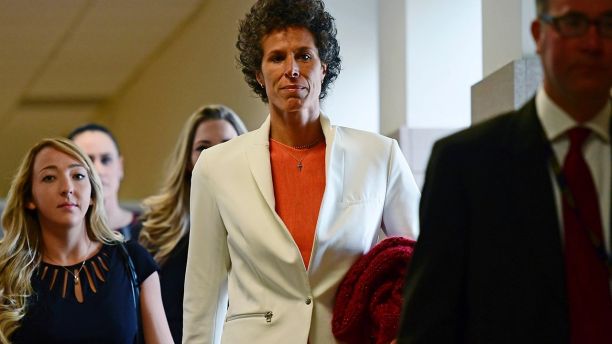 Andrea Constand testified during the trial that she was simply at the trial "for justice."  (AP)

Cosby's new legal team, which was headed by famed Michael Jackson attorney Mesereau, failed to prove Constand was "greedy" and wanted to extort money from Cosby. Cosby's chief accuser explained in court that she was simply at the trial "for justice."

Constand, 45, gave virtually the same account as when she testified at Cosby’s first trial, which ended in a mistrial on June 17, 2017, after the jury deliberated for more than 52 hours over six days and still couldn’t reach a verdict.

She testified that Cosby slipped her three blue pills he called “your friends.” She said she thought they were herbal supplements designed to help relieve her stress, but they knocked her out. When she awoke, she said, Cosby was violating her.

Cosby maintained he gave Constand the cold medicine Benadryl and that she consented to a sexual encounter. In a two-hour, tag-team closing argument, Cosby's lawyers, Mesereau and Kathleen Bliss, painted Constand as a “pathological liar” scheming for a big payday.

Prosecutor Stewart Ryan urged the jurors to stand with Constand and look Cosby in the eye and “tell him the truth about what he did.”

The defense was dealt a huge blow when the judge determined there was “no persuasive" reason to let Cosby's lawyers read deposition testimony from Constand's confidante, Sheri Williams, into the record. The defense expected Williams' testimony to refute Constand's claims that she was unaware he was romantically interested in her. They said she'd show that Constand "could not have been the unwitting victim" prosecutors have portrayed.

Another major difference in the retrial was Judge O'Neill's decision to allow prosecutors to have five additional accusers testify — including model Janice Dickinson — as they attempted to show Cosby made a habit of drugging and violating women. The judge allowed just one other accuser to take the stand last year.

O'Neill also allowed Cosby's legal team to call as a witness a former co-worker of Constand's at Temple University who said Constand spoke of setting up a "high-profile person" so she could sue and enjoy a big payday. Constand's lawyer argued the co-worker lied.

In addition, the judge decided to allow the jury to hear that Cosby paid $3.4 million to Constand to settle her lawsuit against him more than a decade ago. The two sides agreed at the first trial not to mention the lawsuit.

The comedian, who starred as Dr. Cliff Huxtable on "The Cosby Show" from 1984 to 1992, earned a reputation as “America's Dad.” That reputation was slowly torn to pieces as dozens of women came forward, beginning in 2014, and accused him of drugging them, assaulting them or both. Their stories were all eerily similar and eventually led to the star being ostracized by Hollywood.

Before his downfall, Cosby was long-known as for his success as a comedian and actor. He won five Grammy Awards after breaking into the stand-up scene in the ‘60s. He then paralleled that success on TV, winning three consecutive Emmy Awards from 1966 to 1968 for his role on “I Spy.” The show elevated him to a new level of stardom and led to the eventual creation of his titular sitcom, “The Cosby Show.” In 1998, he became known to a new generation as the host of “Kids Say the Darndest Things.”

He was also once lauded as a philanthropist, and received more than 50 honorary degrees from universities across the country. Cosby's legacy of giving was topped by a $20 million gift to Spelman College in 1988 and including, among many other donations, $3 million to the Morehouse School of Medicine and $1 million in 2004 to the U.S. National Slavery Museum in Fredericksburg, Virginia.

But most of Cosby’s honorary degrees were revoked one-by-one as more and more women came forward to allege he had assaulted them.

In the end, it was one woman – Constand – that had the information and the statute of limitations on her side to force Cosby to trial.