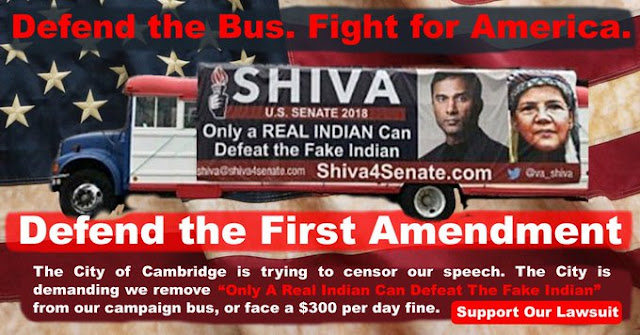 Shiva Ayyadurai, who is looking to unseat Elizabeth Warren, is a "Real Indian." You can see where this is headed.

CAMBRIDGE, MA – One of the candidates challenging Elizabeth Warren for her U.S. Senate seat has filed a federal lawsuit against the City of Cambridge accusing it of violating his First Amendment rights.

His campaign was asked to move or get rid of the slogan "Only A Real Indian Can Defeat The Fake Indian" draped over his campaign bus, which was parked at an office building he owned.

Shiva Ayyadurai, who Boston magazine dubbed "The Shock Candidate" in a profile last summer, graduated from MIT, where he was once a liberal activist before he became a Republican. Now he campaigns as an Independent from a refurbished school bus with slogans painted on it.

Ayyadurai and his campaign filed the case in U.S. District Court in Boston on April 22.

The federal complaint says at the beginning of the month someone from the city's Inspectional Services Department emailed Ayyadurai's campaign following several anonymous complaints and said the bus was in violation of Article 7, Section 7.10 of the City of Cambridge Zoning Ordinance, which defines signs as:

Sign shall mean and include any permanent or temporary structure, device, letter, words, model, banner, pennant, insignia, trade flag, or representation used as, or which is in the nature of, an advertisement, announcement, or direction and which is designed to be seen from the outside of a building.

Article 7, Section 7.13.2 of the City of Cambridge Zoning Ordinance defines types of signs as:

A sign that is attached to or part of a completely self-supporting structure and which is not attached to any building or other structure.

The email said that because there were signs displayed without approvals and permits from the Inspectional Services Department it must be removed, and there will be a $300 fine for each day it isn't.

The slogan however, is draped on a bus, which is in the parking lot when not on the road. It's not part of the building, which is free of any signs commercial, political or otherwise, argues Ayyadurai and his campaign.

"This lawsuit was filed by email over the weekend. We have not been served with it yet and just received it by email late this afternoon. We therefore have not had an opportunity to review it yet. In addition, it is not the City's practice to comment on ongoing litigation," said Cambridge City Hall's Director of Communications and Community Relations Lee Gianetti in an email to Patch after publication.

The complaint says that previous signage on the bus - like "Shiva 4 Senate be the light" or "Fight For America: Shiva 4 Senate" - was on the bus for nearly a year and didn't invite any such complaints.

Ayyadurai estimated 1 in 10 people complain to him or his campaign about the sign, but for the most part, people have given him positive feedback.

That's until April 5, when the city sent a warning letter objecting to the latest banner, which includes a photo of Ayyadurai in a dark suit next to an image of Warren depicted wearing a Native American headdress.

"A wide variety of vehicles are daily parked in City spaces and private lots, all carrying commercial and political messages. Yet the City never attempts to regulate the messages on those vehicles," reads the court document.

Ayyadurai launched his campaign last June using the hashtag #FakeIndian.
His slogan comes from critics' claim that Warren made up her heritage in order to receive preferential admission into Harvard. Warren has stood by her claims that she has Native American heritage, to chides by President Donald Trump who has called her "Pocahontas" on several occasions.

The complaint claims that the city was motivated by political bias when it alleged the slogan on the vehicle constituted a sign code violation. To the idea that the slogan is racist, Ayyadurai counters that it's multi-layered.

"It's a great slogan," he told Patch in a phone interview. "It's like a haiku in some ways. Behind that slogan is a massive amount of depth: there's this Indian guy who came from a low caste family in India and got four degrees.

Then there's the dimension of a person who lied to get into Harvard," he said.
The lawsuit seeks to put injunctions against the city's fines. And Ayyadurai, who is running on an anti-establishment platform in the November election, said he can't think of another reason why he's being told to take down his message, other than Cambridge is "in kahoots" with Warren.

Warren's campaign representatives did not immediately return request for comment from Patch.

Ayyadurai is one of a handful who is running against Warren. He started as a Republican, and is now running as an Independent.

Ayyadurai was born in Bombay, India, (which is now called Mumbai) and immigrated to America as a child. He holds four degrees, including a Ph.D. from MIT, and in 2007 was granted a Fulbright scholarship.

He also claims to have invented email when he was 14, although that's contested with a number of accounts placing Ray Tomlinson as the inventor.

He's also filed 10 lawsuits in federal court since 1997, including one against Gawker Media.

UNBELIEVABLE! What is AMERICA Becoming? The City of Cambridge is CENSORING FREE SPEECH by threatening #Shiva4Senate with a $300/day FINE if we DO NOT remove slogan “Only A Real Indian Can Defeat The #FakeIndian.” From BUS. @RealJamesWoods. We may sue. https://shiva4senate.com/defend-the-bus-defend-the-first-amendment/ …

https://patch.com/massachusetts/cambridge/warrens-real-indian-opponent-suing-city-cambridge
Posted by Frances Rice at 10:43 AM