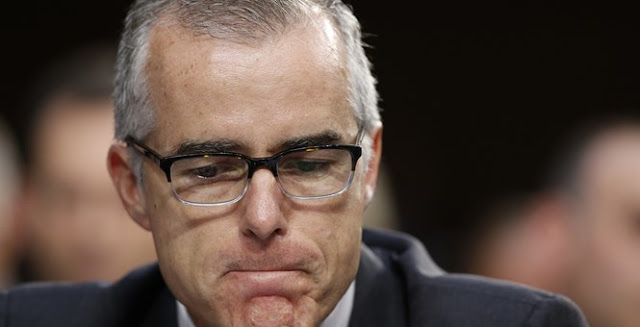 FBI agents Peter Strzok and Lisa Page, who were caught sending hundreds of anti-Trump text messages during the Clinton investigation, have also been referred for criminal investigation.

U.S. Attorney John Huber, who was tapped by Sessions a few weeks ago to investigate the FBI's handling of the Clinton email probe, was copied on the request.

Now, the nonpartisan, Obama-appointed Department of Justice Inspector General has sent his report to a federal prosecutor to see if Mr. McCabe should be charged with a crime.

McCabe was torched in the IG report, where he was cited for lying under oath three times and misleading investigators concerning an unauthorized media disclosure to The Wall Street Journal over the Clinton Foundation (via WaPo):

The Justice Department inspector general referred its finding that former FBI Deputy Director Andrew McCabe repeatedly misled investigators who were examining a media disclosure to the top federal prosecutor in D.C. to determine whether McCabe should be charged with a crime, according to people familiar with the matter.

The referral to the D.C. U.S. Attorney’s Office occurred some time ago, after the inspector general concluded McCabe had lied to investigators or his own boss, then-FBI Director James B. Comey, on four occasions, three of them under oath.

It was not immediately clear how the D.C. U.S. Attorney’s Office responded to the referral, or whether prosecutors there are conducting their own investigation or believe criminal charges are appropriate.

A referral to federal prosecutors does not necessarily mean McCabe will be charged with a crime.

The Justice Department, the D.C. U.S. Attorney’s Office and a spokeswoman for McCabe declined to comment Thursday.

It says he inappropriately authorized the disclosure of sensitive information to the media, then lied repeatedly to investigators examining the matter. The report — which quickly became public, though it was not released by the inspector general — laid out in stunning detail allegations McCabe had deceived investigators about his role in approving the disclosure, even as he lashed out at others in the FBI for leaks.

McCabe, though, disputes many of the report’s findings and has said he never meant to mislead anyone.

Lying to federal investigators is a crime punishable by up to five years in prison, and some legal analysts speculated in the wake of the report that the inspector general seemed to be laying out a case for accusing McCabe of such conduct. The report alleged that one of McCabe’s lies “was done knowingly and intentionally” — which is a key aspect of the federal crime.

The FBI and DOJ were reportedly at odds over this probe and the report reconfirmed that the bureau was investigating the nonprofit for possible felonious activity following a flurry of stories that seemed to show the foundation as being a bed of unethical behavior; a bank for favors to sum it up for those who gave very large amounts of money.

Devlin Barrett wrote the article that detailed the tension in October of 2016, which set off a mole hunt within the bureau, even though McCabe ordered it.

McCabe was fired in March, hours away from collecting his multi-million dollar pension.

In the past couple of days, McCabe, Comey, and Lynch have thrown each other under the bus.

The Comey-McCabe flare up is especially popcorn-worthy since Comey had tweeted support for McCabe, adding he was a man who served with distinction at the FBI. Also, he issued an internal review of him while he was still FBI director due to the WSJ leak.

I mean one could argue that we’re really getting into James Jesus Angleton territory here, the top CIA counter-intelligence agent who said that deception is the state of the mind and the mind of the state.

Whatever the reason, Comey launched the internal probe that destroyed McCabe’s career (via Daily Beast):

James Comey appears to have inadvertently played a role in his deputy Andrew McCabe’s expulsion from the FBI.

According to a source familiar with the investigation that led to McCabe’s firing, Comey—then FBI director—asked the bureau’s internal Inspection Division to look into an Oct. 30, 2016, Wall Street Journal story that included leaks from inside the bureau. T

he Inspection Division took on the case and started trying to determine who was responsible for the leak. When they realized McCabe, the bureau’s deputy director, was a likely culprit, they handed off the investigation to the Justice Department’s inspector general, according to an IG report released late last week.

Attorney General Jeff Sessions cited that detailed IG report when he announced McCabe had been fired barely before he was eligible for his retirement.

The story that followed left Comey deeply upset because it highlighted extraordinary tensions between senior leadership at the bureau and a top official at Justice Department headquarters, according to the IG report.
Comey raised concerns about the article in a staff meeting the next day.

McCabe and Comey later discussed the piece in person. The two men gave the inspector general vastly different characterizations of that conversation. In McCabe’s version, McCabe told Comey that he authorized the two FBI officials to share details of the conversation about the Clinton Foundation investigation with the Journal. Comey “did not react negatively, just kind of accepted it,” according to McCabe.

In Comey’s version, however, McCabe never told him he authorized the leaks to the Journal. Comey was “very concerned” about the story and thought it would be toxic for the FBI’s relationship with Justice Department headquarters. And according to Comey, McCabe said he had nothing to do with it.
“I have a strong impression he conveyed to me, ‘it wasn’t me, boss,’” Comey told the inspector general.

Well, at least McCabe has a rather sizable defense fund.

A lawyer for fired FBI Deputy Director Andrew McCabe says a criminal referral to prosecutors about his client is “unjustified.”

Attorney Michael Bromwich confirmed the referral to the U.S. Attorney’s Office in Washington in a statement Thursday.

It comes amid an inspector general report that concluded that McCabe misled investigators about his role in a news media disclosure.

The referral doesn’t mean he will be charged, but it does mean he could face a criminal investigation.

In his statement, Bromwich says the standard for an inspector general referral “is very low.”

He says he’s already met with representatives from the U.S. Attorney’s office and is confident that, “unless there is inappropriate pressure from high levels of the Administration, the US Attorney’s Office will conclude that it should decline to prosecute.”