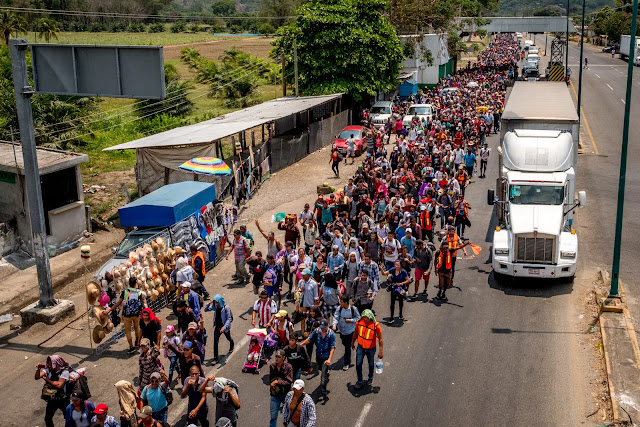 Over 1000 people from Central America are walking in a caravan through Mexico to the United States.

President Donald Trump is sending National Guard forces to assist border authorities along the U.S.-Mexico boundary, according to a presidential memorandum that the White House released Wednesday night.

“The situation at the border has now reached a point of crisis,” Trump said in the memorandum. “The lawlessness that continues at our southern border is fundamentally incompatible with the safety, security, and sovereignty of the American people. My administration has no choice but to act.”
The president said that the nation’s security was under threat from “drastic illegal activity,” including drug smuggling. He also cited the threat of gangs, included MS-13. “The anticipated rapid rise in illegal crossings as we head into the spring and summer months threatens to overwhelm our Nation’s law enforcement capacities,” Trump wrote.
The memorandum did not say how many National Guard troops would be sent to the border or for how long. Trump said he was directing Defense Secretary Jim Mattis and Homeland Security Secretary Kirstjen Nielsen, in coordination with Attorney General Jeff Sessions, to come up with “an action plan” within 30 days.
The move followed Trump’s warning Tuesday to Mexican leaders that he would abandon the North American Free Trade Agreement without assurances of help on securing the border. Nielsen said earlier Wednesday that her department saw dangerous levels of illegal immigration and drug-trafficking across the border.
She said the National Guard troops would act as “support” for border patrol agents. She added they would be called up under a law that provides federal financing for the guard units’ deployment costs but permits the state governor to retain control of the troops.
“Our Border Laws are very weak while those of Mexico & Canada are very strong,” Trump said Wednesday in a Twitter posting. “Congress must change these Obama era, and other, laws NOW! The Democrats stand in our way - they want people to pour into our country unchecked....CRIME! We will be taking strong action today.”
New Mexico Senator Tom Udall, a Democrat, criticized the deployment as an “offensive effort to militarize the border” and “another pitiful attempt to distract attention from the dangerous chaos the president is creating.”
“Smart border technology and more customs officers would be a much more effective and efficient security investment, that would also benefit our economy and relations with Mexico,” Udall said in a statement emailed to reporters.
Trump was briefed Tuesday on his administration’s border strategy by Nielsen, Mattis, Sessions, Chairman of the Joint Chiefs of Staff General Joseph Dunford, Chief of Staff John Kelly and other senior officials, White House Press Secretary Sarah Huckabee Sanders said in a statement.

A senior White House official also said the Trump administration was crafting legislation to make it harder for refugees to gain asylum in the U.S. and loosen restrictions on undocumented immigrants apprehended near the border.
Trump has previously suggested that he could use money allocated for the U.S. military to construct the border wall for which he has so far been unable to secure congressional funding.
Since the weekend, Trump has been tweeting and talking about border security following reports that more than 1,000 Central Americans, most from Honduras, are traveling north toward the U.S.’s southern border with the help of Pueblo Sin Fronteras, a group that has organized several similar “refugee caravans” in recent years.
Trump has faced pressure from immigration hawks to show that he remains committed to their cause after signing a government spending bill last month that fell far short of the goals he’d set for new border wall construction this year.
The Defense Department has in the past helped the Department of Homeland Security with border security measures, and George W. Bush and Barack Obama both deployed National Guard troops to the border during their presidencies to bolster security. Obama announced in May 2010 that as many as 1,200 national guard troops would help patrol fenced areas of the border, in addition to extra customs and border agents.
American law may also restrict how much the military can do to carry out Trump’s wishes. The late-19th century Posse Comitatus Act is viewed as prohibiting the use of the military to execute domestic laws, according to a 2013 report by the Congressional Research Service.
— With assistance by Terrence Dopp, Roxana Tiron, and Erik Wasson