The Great Scott of Florida 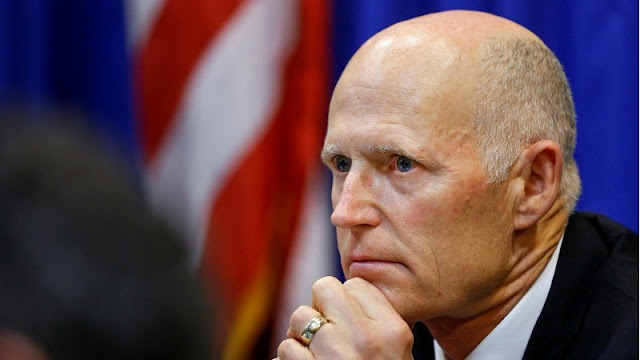 Rick Scott, Florida’s popular governor, has a good chance of ousting a Democratic senator this fall.

Naples, Fla. — Noted political handicapper Charlie Cook sees nothing but bad news for Republicans in the midterm elections. “If I were Republican, I’d be nauseous right now with what’s coming up,” he said on Sunday’s Meet the Press on NBC.

But that’s not quite true. Cook’s own analysis of House races shows Democrats leading in 27 out of 55 competitive races, and only a slight favorite to win control of the chamber.

And in the Senate, Republicans will get a big boost Monday when Florida governor Rick Scott announces that he will challenge 75-year-old Democratic senator Bill Nelson this year.

Scott has won two highly competitive runs for governor, and his wealth means that he can partially finance an ad campaign in the ultra-expensive media markets of the state.

Scott is the GOP’s best chance to win a seat that could decide whether the party keeps control of the Senate. The most recent polls show Nelson with less than a four-point edge.

But Scott has overcome much bigger deficits in the past. In 2010, he beat Alex Sink, a former banker, and in 2014 he beat party-switching former governor Charlie Crist. He won both races by a single percentage point. Both races featured charges that Scott was a heartless former hospital executive who relentlessly focused on job creation and economic improvement, at the expense of other pressing issues.

Seven years after his first election, Scott feels vindicated for his laser-like focus.

During his tenure, Florida has cut taxes year after year, seen the highest public-high-school graduation rates in 13 years, created 1.26 million private-sector jobs since 2011, and had the lowest crime rate in 45 years.

Unemployment is a third what it was when he took office in the aftermath of the 2008 financial meltdown. Housing prices went up 15 percent in Florida last year, continuing the state’s recovery from a housing bust.

Scott also touts his deregulation record. “Burdensome regulations are the No. 1 reason our economy doesn’t provide enough jobs for everyone,” he told me at a New York lunch last year. “In Florida we have cut taxes, but ending 3,000 regulations is what’s made our economy take off. If I decide to go to Washington, I want to help President Trump continue to take the leg irons off of this economy and reinvent government.”

Scott says his persistent efforts to make Florida a business-friendly mecca have paid off politically. In 2014, he won 38 percent of voters under the age of 25 and the same percentage among Hispanic voters — two groups Republicans have struggled with.

All this doesn’t mean that Governor Scott hasn’t fallen off the conservative wagon at times when political pressures have built up.

There’s no doubt that Scott’s policies have left the state far better off than high-tax liberal bastions.

In 2012, he reversed course and proposed expanding the state’s Medicaid program to comply with Obamacare. He was rescued from that folly only by his Republican legislature, which knew that Washington couldn’t be trusted with its end of the bargain.

In 2015, he failed to appeal a court decision that made it easier for noncitizens to vote with impunity. This spring, he responded with alacrity to the Parkland, Fla., school shootings, supporting some of the changes advocated by gun-control activists. He embraced a bill banning firearms sales to almost everyone under age 21, and he opposed President Trump’s idea of arming school teachers.

Then there is the state budget.

Scott was a fan of budget vetoes in his first years as governor, but last month he signed a budget that included $4 billion in new spending.

University of Central Florida professor Aubrey Jewett says the spending plan looks like a political document. “It is not consistent with what he had done,” Jewett told USA Today. “It looks like it is designed to help him run for the U.S. Senate.”

Scott is unfazed by such criticism.

The economic growth his policies have aided means that the state is strong enough to make “investments” in key spending areas, he says.

There’s no doubt that Scott’s policies have left the state far better off than high-tax liberal bastions.

Florida gained 350,000 new residents, many of them economic escapees from high-tax California, New Jersey, and Connecticut.

Scott says the liberal governors of those states are the best advertisements for their citizens picking up stakes and moving to Florida.

Conservatives feel good about Scott taking his record to the voters this November.

Ron DeSantis, a Republican congressman who is running to succeed Scott as governor, told me this weekend that Scott will also be able to pummel Nelson, the Democratic incumbent senator, for his votes against Supreme Court nominee Neil Gorsuch and against the Trump tax cut.

Grover Norquist, the president of Americans for Tax Reform, says Scott can use the state’s prosperity to appeal to many voters who wouldn’t normally be reachable.

A recent Mason Dixon poll, for example, found that even 59 percent of Democrats think that the state’s economy is on the right track.

Rick Scott signed and kept the pledge against raising taxes for eight years.

Even better, “he cut taxes each and every year of his governorship,” Norquist told me. “He always put taxpayers ahead of the special interests, and that’s a winning political formula.”

https://www.nationalreview.com/2018/04/the-great-scott-of-florida/
Posted by Frances Rice at 9:52 AM