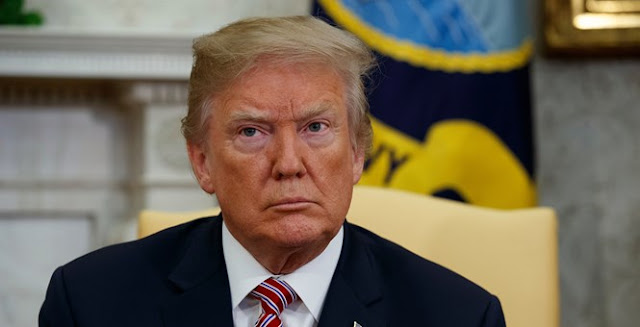 President Trump pushed back hard against former FBI Director James Comey Friday morning over his book that portrays him as an unethical leader who’s “untethered to truth.”

James Comey is a proven LEAKER & LIAR. Virtually everyone in Washington thought he should be fired for the terrible job he did-until he was, in fact, fired. He leaked CLASSIFIED information, for which he should be prosecuted. He lied to Congress under OATH. He is a weak and.....

....untruthful slime ball who was, as time has proven, a terrible Director of the FBI. His handling of the Crooked Hillary Clinton case, and the events surrounding it, will go down as one of the worst “botch jobs” of history. It was my great honor to fire James Comey!
________________

Comey’s book, “A Higher Loyalty,” will be released next week but excerpts have come out that, in addition to portraying him as a compulsive liar, argue he’s “ego driven,” his presidency is like a “forest fire,” and that his interactions with the Trump administration remind him of his “earlier career as a prosecutor against the Mob.”

"The silent circle of assent. The boss in complete control. The loyalty oaths. The us-versus-them worldview," Comey reportedly says in the book. "The lying about all things, large and small, in service to some code of loyalty that put the organization above morality and above the truth." 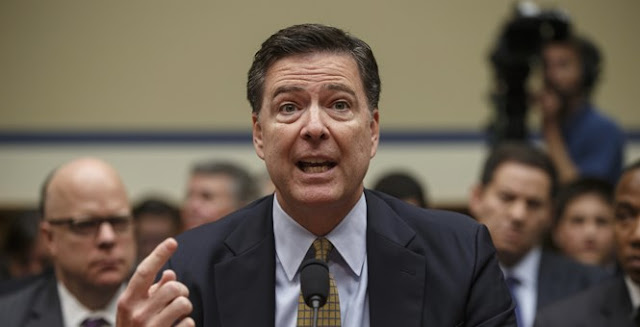 Both sides have vilified Comey.

The Right thinks Comey should have prosecuted Hillary Clinton for mishandling classified information, which was sent through her private, unsecure, and unauthorized email server. Clinton used this for all official business as out secretary of state.

The Left thinks the email probe is what caused Hillary to lose, especially when the embattled director informed Congress that emails from then-Secretary Clinton were found on the laptop of Anthony Weiner, husband to Hillary top aide Huma Abedin.

In the book, he described President Trump as mafia boss, who is “untethered to truth” (via AP):

Former FBI Director James Comey blasts President Donald Trump as unethical and “untethered to truth” and calls his leadership of the country “ego driven and about personal loyalty” in a forthcoming book.

Comey reveals new details about his interactions with Trump and his own decision-making in handling the Hillary Clinton email investigation before the 2016 election. He casts Trump as a mafia boss-like figure who sought to blur the line between law enforcement and politics and tried to pressure him regarding his investigation into Russian election interference.

The book adheres closely to Comey’s public testimony and written statements about his contacts with the president during the early days of the administration and his growing concern about the president’s integrity. It also includes strikingly personal jabs at Trump that appear likely to irritate the president.

The 6-foot-8 Comey describes Trump as shorter than he expected with a “too long” tie and “bright white half-moons” under his eyes that he suggests came from tanning goggles. He also says he made a conscious effort to check the president’s hand size, saying it was “smaller than mine, but did not seem unusually so.”

The book, “A Higher Loyalty,” is to be released next week. The Associated Press purchased a copy this week.

The New York Times went a bit further detailing the book, namely his reactions to former top Bush officials, and his annoyance with former Attorney General Loretta Lynch, who more than hinted that Comey should refer to the Hillary email probe as a “matter” and not an investigation, which it was—but there was something else he admitted that was bound to set off liberals [emphasis mine]:

Comey draws a scathing portrait of Vice President Dick Cheney’s legal adviser David S. Addington, who spearheaded the arguments of many hard-liners in the George W. Bush White House; Comey describes their point of view: “The war on terrorism justified stretching, if not breaking, the written law.”

He depicts Bush national security adviser and later Secretary of State Condoleezza Rice as uninterested in having a detailed policy discussion of interrogation policy and the question of torture.

He takes Barack Obama’s attorney general Loretta Lynch to task for asking him to refer to the Clinton email case as a “matter,” not an “investigation.” (Comey tartly notes that “the F.B.I. didn’t do ‘matters.’”)

And he compares Trump’s attorney general, Jeff Sessions, to Alberto R. Gonzales, who served in the same position under Bush, writing that both were “overwhelmed and overmatched by the job,” but “Sessions lacked the kindness Gonzales radiated.”

Comey is what Saul Bellow called a “first-class noticer.” He notices, for instance, “the soft white pouches under” Trump’s “expressionless blue eyes”; coyly observes that the president’s hands are smaller than his own “but did not seem unusually so”; and points out that he never saw Trump laugh — a sign, Comey suspects, of his “deep insecurity, his inability to be vulnerable or to risk himself by appreciating the humor of others, which, on reflection, is really very sad in a leader, and a little scary in a president.”

As for his controversial disclosure on Oct. 28, 2016, 11 days before the election, that the F.B.I. was reviewing more Clinton emails that might be pertinent to its earlier investigation, Comey notes here that he had assumed from media polling that Clinton was going to win.

He has repeatedly asked himself, he writes, whether he was influenced by that assumption:

“It is entirely possible that, because I was making decisions in an environment where Hillary Clinton was sure to be the next president, my concern about making her an illegitimate president by concealing the restarted investigation bore greater weight than it would have if the election appeared closer or if Donald Trump were ahead in all polls. But I don’t know.”

Yeah, the head of our nation’s preeminent federal domestic law enforcement agency decided to uphold the rule of law by polling.

That’s messed up, though liberals seem to be more incensed.

Comey also delved into the tension between the FBI and the DOJ over the Clinton probe, with the former FBI Director worried that the DOJ would “screw around” on whether to issue and indictment or not. Either way, he knew that any decision was going to be viewed as political. There was no winning this one (via Fox News):

Defending his July 2016 public statement about the Hillary Clinton email case, then-FBI Director James Comey told senior agents later that year he worried the Justice Department would "screw around" with a decision on whether to prosecute her, and he said that regardless of what happened, "we knew it was going to suck in a huge way," according to an FBI transcript reviewed by Fox News.

In October 2016, Michael Kortan, who was serving as the FBI's public affairs chief but has since retired, shared the transcript of Comey's comments on the Clinton case delivered behind closed doors to special agents in charge. Based on the email date and time stamps, it appears the comments were made three weeks before the presidential election. With Comey now launching a media tour to promote his book, "A Higher Loyalty," the transcript provides a window into his thinking and decisions during critical period before the election.

Comey's decision to deviate from standard procedures is central to the Justice Department inspector general's investigation into the FBI's and DOJ's handling of the Clinton email case.

Comey said he thought the FBI should have taken the lead because following standard procedures was not an option. "...what will happen to us is the Department of Justice will screw around it for Lord knows how long, issue probably a one sentence declination, and then the world will catch on fire, and then the cry in the public will be where on the earth is the FBI, how could the FBI be part of some corrupt political bargain like this, there's no transparency whatsoever..."

He continued, "We knew it was going to suck in a huge way. I knew. Nothing's (sic) that's happened, by the way, the storm has been outside my expectations. I knew what was going to happen, but I also knew after a lot of reflection that we would do far more damage to our beloved institution if we did the normal thing."

Okay—I can see why liberals would be mad at the blasé attitude towards the October letter to Congress.

It was later discovered that Weiner and Abedin shared the computer. The laptop was being analyzed by the FBI, who were investigating Weiner for inappropriate communications with an underage girl. Yeah, Carlos Danger was back.

Still, the fact remains that pollsters really don’t know if the letter had any impact at all.

Clinton still had no message, no charisma, no political skill, and called roughly half the country deplorable for supporting Donald Trump.

She didn’t campaign as hard in the Rust Belt. She didn’t laser focus on winning back working class voters—all of this contributed to her defeat.

It’s her fault, which she admits after blaming The DNC, Comey, FBI, the Media, Russia, sexism, misogyny, Obama, Biden, and Sanders.

In just a few days former FBI Director James Comey will be on television screens across America promoting his new book, A Higher Loyalty: Truth, Lies, and Leadership. I

It is expected Comey goes after President Trump in the text and will no doubt do the same during a marathon of media interviews.

Ahead of the launch date, the Republican National Committee is playing offense and has launched a new website titled "Lyin' Comey."

"May he's not in the right job," Pelosi is quoted as saying."

"[He] badly overstepped his bounds," a Clinton quote says.

Fox News has the scoop on the development:

“James Comey’s publicity tour is a self-serving attempt to make money and rehabilitate his own image,” an RNC official told Fox News. “Comey is a liar and a leaker, and his misconduct led both Republicans and Democrats to call for his firing. If Comey wants the spotlight back on him, we’ll make sure the American people understand why he has no one but himself to blame for his complete lack of credibility.”

The official told Fox News that the RNC has prepared a rapid response team to respond to claims made in Comey’s book, compiled a research team to fact check, and created a “war room” to monitor his appearances.

Comey was abrubtly fired by President Trump last year and has been unpopular on both sides of the political aisle.