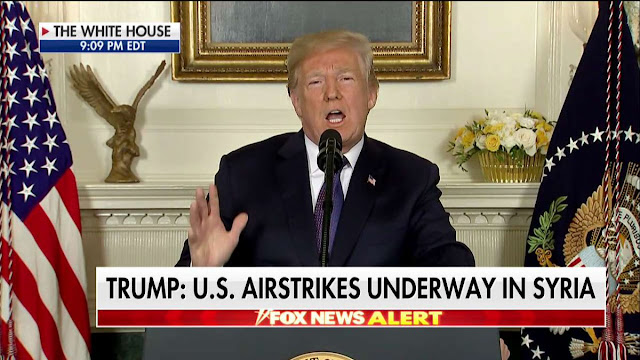 President Trump on Friday announced that he has approved military strikes in Syria against the regime of Syrian President Bashar al-Assad.
GO TOT HE ARTICLE TO VIEW A VIDEO OF THE PRESIDENT'S REMARKS
The decision follows a suspected chemical gas attack from the Assad regime on a rebel-held town near the Syrian capital last weekend.
Trump's announcement immediately preceded reports of loud explosions lighting up the sky in Damascus.
The United States launched the response, along with assurance from France and the United Kingdom, Trump stated.
At least 40 people died in the attack in Douma, about 10 miles east of Damascus, and over 500 people, mostly women and children, were injured and brought to medical centers. The attack occurred amid a resumed offensive by Syrian government forces after the collapse of a truce. Syrian activists, rescuers and medics said families suffocated in their homes.
Assad's actions, Trump said, "are not the actions of a man," but "are the crimes of a monster instead."
A similar chemical attack in Khan Sheikhoun in April 2017 that killed nearly 100 people prompted the U.S. to launch dozens of cruise missiles at a Syrian airfield to dissuade Assad from using chemical weapons in the future, officials said. But during the weekend, images of dead and sick women and children again circulated following another alleged chemical attack.
In his statement, the president also hit Russia and Iran for their sustained support of the Assad regime.
"To Iran and to Russia I ask, what kind of nation wants to be associated with the mass murder of innocent men, women and children," Trump asked.
"The nations of the world can be judged by the friends that they keep," he continued. "Russia must decide if it will continue down this dark path or continue with civilized nations."
This is a developing story; please check back for updates
Fox News’ Ben Evansky and Alex Pappas contributed to this report.