Fifty years after his death, many pay lip service to his ideals, but far too few are following his example. 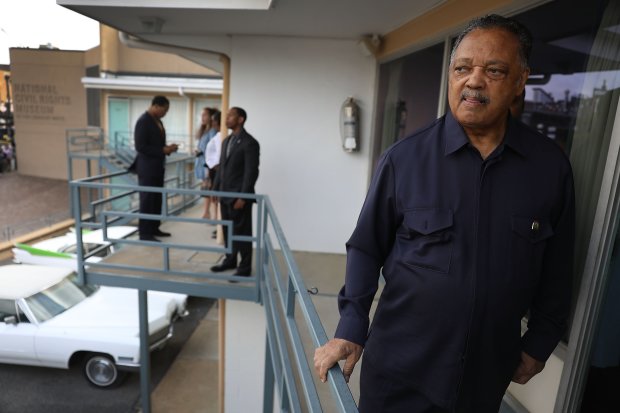 Rev. Jesse Jackson visits the balcony outside room 306 at the Lorraine Motel, where he was when Dr. Martin Luther King, Jr. was assassinated, on April 3, 2018 in Memphis, Tenn. Photo: Joe Raedle/Getty Images

After Martin Luther King Jr. was shot dead 50 years ago as he stood on the balcony of a motel in Memphis, Tenn., riots broke out in more than 100 cities.

There were also reports of violence on college campuses and even on military bases overseas, where some black soldiers refused to report for duty.

In Washington, so many fires were set that you couldn’t see the U.S. Capitol because of all the smoke. Gen. William Westmoreland, who commanded the U.S. forces in Vietnam and happened to be in Washington at the time, said the unrest had left the nation’s capital looking “worse than Saigon did at the height of the Tet offensive.”

President Lyndon B. Johnson responded by convening a meeting of the nation’s most prominent black activists, and the invite list is instructive.

It included A. Philip Randolph, who led the fight to desegregate the military; Whitney Young, head of the National Urban League; Roy Wilkins, leader of the NAACP; and Bayard Rustin, a top adviser to King who had helped organize the seminal 1955 bus boycott in Montgomery, Ala., and the 1963 March on Washington.

It almost goes without saying that the leading civil-rights organizations today can no longer count people of that caliber in their ranks.

Which may be the clearest indication yet that the movement is over and that the right side prevailed.

If black Americans were still faced with legitimate threats to civil rights—such as legal discrimination or voter disenfranchisement—we would see true successors to the King-era luminaries step forward, not the pretenders in place today who have turned a movement into an industry, if not a racket.

Racial gaps that were steadily narrowing in the 1940s, ’50s and ’60s would expand in the 1970s, ’80s and ’90s, which suggests that the disparities that continue today aren’t being driven by racism, notwithstanding claims to the contrary from liberals and their allies in the media.

It also suggests that attitudes toward marriage, education, work and the rule of law play a much larger role than the left wants to acknowledge.

Even electing and appointing more black officials, which has been a major priority for civil-rights leaders over the past half-century, can’t compensate for these cultural deficiencies.

Black mayors, police chiefs and school superintendents have been commonplace since the 1970s, including in major cities with large black populations.

Racially gerrymandered voting districts have ensured the election of blacks to Congress.

Even the election of a black president—twice—failed to close the divide in many key measures. Black-white differences in poverty, home ownership and incomes all grew wider under President Obama.

Discussion of antisocial behavior in poor black communities, let alone the possibility that it plays a significant role in racial inequality, has become another casualty of the post-’60s era.

King and other black leaders at the time spoke openly about the need for more-responsible behavior in poor black communities.

After remarking on disproportionately high inner-city crime rates, King told a black congregation in St. Louis that “we’ve got to do something about our moral standards.” He added: “We know that there are many things wrong in the white world, but there are many things wrong in the black world too. We can’t keep on blaming the white man. There are things we must do for ourselves.”

King’s successors mostly ignore this advice, preferring instead to keep the onus on whites.

Where King tried to instill in young people the importance of personal responsibility and self-determination notwithstanding racial barriers, his counterparts today spend more time making excuses for counterproductive behavior and dismissing criticism of it as racist.

Activists who long ago abandoned King’s colorblind standard, which was the basis for the landmark civil-rights laws enacted in the 1960s, tell black youths today that they are victims, first and foremost.

But neglecting or playing down the role that blacks must play in addressing racial disparities can only exacerbate them.

Fifty years after King’s death, plenty of people are paying him lip service. Far too few are following his example.