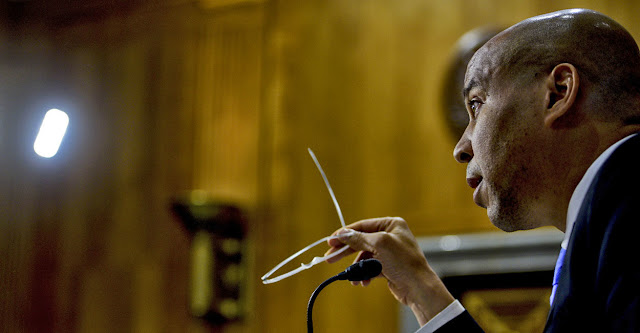 “Do you believe that gay sex is a perversion?”

Believe it or not, that question was posed—repeatedly—in a Thursday Senate confirmation hearing to Mike Pompeo, the CIA director now nominated to be secretary of state. The graphic question was put to him by Sen. Cory Booker, D-N.J.

He also wanted to know exactly what Pompeo thought about same-sex marriage.

He presumes, almost out of thin air, to set a new non-negotiable standard for anyone who wants to hold executive office: You must be completely on board with same-sex marriage, you must affirm gay sex, and you must espouse these convictions openly.

This kind of thought policing is becoming a trend for politicians on the left.

Last year, Sen. Bernie Sanders, I-Vt., treated Russ Vought with similar hostility in his confirmation hearing to be deputy director of the Office of Management and Budget. Sanders asked Vought, a Christian, if he stood by his past statements about salvation and final judgment—then excoriated him when he refused to recant his orthodox Christian beliefs.

Booker treated Pompeo with the same inquisitorial attitude, perhaps confirming a sad new norm in the treatment of conservative nominees for executive office.

What is most striking is that Booker seems baffled by Pompeo’s refusal to accept the left’s views on sexuality. Yet, contra the attitude of the left that such views are normal, Pompeo’s views are the same as the ones countless Democrats and even President Barack Obama held until very recently.

Booker may be surprised to learn that opposition to same-sex marriage is still very much a mainstream view in America. According to a 2017 Gallup poll, about 1 in 3 Americans disagreed with same-sex marriage. That’s about 100 million people.

Perhaps Booker can be forgiven for his ignorance of this large segment of the nation, though, since so few social conservatives speak up about their views in public these days.

But more to the point of Thursday’s hearing, Pompeo’s views on marriage are completely irrelevant to the job that he seeks. At least, they should be irrelevant. Foreign policy should have nothing to do with promoting a vision of sexuality abroad, particularly one that is novel and offensive to many cultures.

Of course, this is quite separate from standing up for the basic human rights of those overseas who identify as LGBT. Some countries punish people simply because of their sexual orientation, and the United States must never condone such actions.

But unfortunately, the U.S. government has gone far beyond standing for basic human rights and has sought to advance a liberal LGBT agenda abroad.

In early 2015, the Obama State Department created a special envoy position to promote LGBT and intersex “rights” abroad. Keep in mind that at the time, same-sex marriage was not even federally recognized in the United States (Obergefell v. Hodges changed that a few months later).

This envoy’s impact abroad has not been negligible. Randy Berry, who held the post from 2015 to 2017, visited dozens of countries where he reported having “frank conversations” with leaders, pressing them to adopt more liberal laws on sexuality and marriage. He took credit for several changes in foreign countries, including Vietnam allowing a change of sex in official documents and Nepal’s new constitution adding sexual orientation and gender identity as protected classes.

Astoundingly, the Trump administration has opted to keep this envoy position in place, even as the State Department is undergoing a massive restructuring. (Berry has, however, transitioned out of the position.)

This envoy is a most egregious form of cultural imperialism, made even more illegitimate by the fact that it misrepresents American values to the world. Same-sex marriage is an extremely recent phenomenon in American life.

It also remains an ongoing source of controversy as LGBT activists seek to wield it as a cudgel against the rights of religious Americans. We are just beginning to grapple with the consequences of same-sex marriage—so what is the State Department doing exporting it abroad?

The Purge at Home

Just as LGBT activists now seek to punish religious Americans in courts of law, liberal politicians like Booker seek to purge the remaining dissenters from polite society. In the world of Cory Booker, there is no place for Mike Pompeo—except perhaps, in a re-education class. Certainly not in the Cabinet.

This sort of social ostracization and occupational discrimination was coming, but liberals long denied it. They assured us that same-sex marriage would make the world more tolerant, that conservative holdouts would have nothing to fear, and that the progressive future would have a place for everyone.

Indeed, some liberals of yesteryear would have flinched hard at Booker’s rigid questioning of Pompeo over something as seemingly peripheral as gay sex.

These liberals either failed to see just how coercive their movement would become, or they knew better and were just placating America while cultural changes gained steam—and then jumped on board the train.

Justice Samuel Alito was very prescient in his 2015 dissent to the Obergefell decision: “I assume that those who cling to old beliefs will be able to whisper their thoughts in the recesses of their homes, but if they repeat those views in public, they will risk being labeled as bigots and treated as such by governments, employers, and schools.” And, we should now add, senators.

It is not Pompeo who went after Booker, and it is not conservatives who are going after liberals. Liberals are the aggressors in the culture war. They introduced the values of sexual libertinism that so many, like Pompeo, would prefer not to imbibe—yet somehow find the audacity to demand conformity to those values as the price of admission into mainstream institutions.

This form of coercion—and it is coercion, by public shaming—is only necessary when an idea is truly vulnerable to rational critique. The truth is, the left needs conservatives to stay silent on this issue. Booker needs Pompeo to keep his head down and at least feign approval of the left’s sexual orthodoxy. Because silence feeds the regime.

https://www.dailysignal.com/2018/04/13/cory-bookers-inquisition-into-marriage-views-is-about-keeping-you-silent/?utm_source=TDS_Email&utm_medium=email&utm_campaign=Top5&mkt_tok=eyJpIjoiT0RrMk1HRXhPVEprT1RFeiIsInQiOiJxT0I3NnJ6Y1lLZHZwTUZkMDkwRkc3OXYrRmRuNUZ4Y2VZQ3FIWDB6S2QrZURVWXZEQzNmd3V0NzJQaWgrNG5wXC9YWkUxWWI5K09HWUdaTGk3SERNMmRFZVV0bDA1dXdzSlR2ZDBoT1Rienl1Z0Q4RDRBSjNHV2l0TTNvbXAxM20ifQ%3D%3D
Posted by Frances Rice at 10:05 AM