US strikes Syria after suspected chemical attack by Assad regime 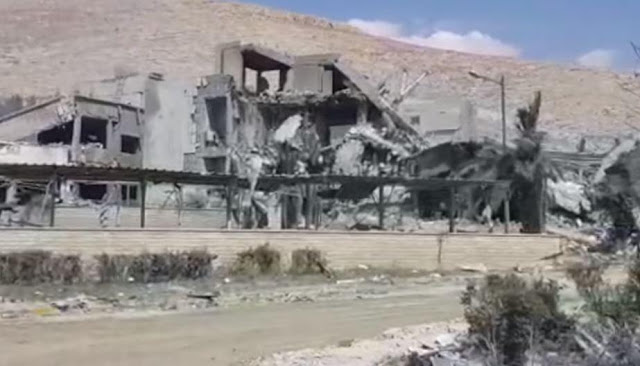 Wiped out... little remains of the research facility after it was devastated by military strikes.

The United States, Britain and France launched precision military strikes in Syria to punish the Assad regime for an apparent chemical weapons attack against civilians.

President Donald Trump called the assault a “combined operation” with two European allies; as Defense Secretary James Mattis said, they targeted three locations in what he described as a heavy but carefully limited assault.

Fox News confirmed that warships and U.S. Air Force B-1 bombers, which flew out of Qatar, were used in Friday’s campaign.

Mattis said no follow-up attacks are planned and that the Pentagon was careful to ensure the safety of Russian troops and Syrian civilians in the area.

The strikes did not cause any casualties and the facilities targeted only had minor damages.

The U.S. officials said Friday’s airstrikes were twice the size of the U.S. assault last year, which targeted a single airbase.

"Clearly the Assad regime did not get the message last year," Mattis said. "This time our allies and we have struck harder."

The attacks stirred up angry responses from Syria’s allies and ignited a debate over whether the attacks were justified.

Russian President Vladimir Putin called the strikes an “act of aggression” that had the “destructive influence on the entire system of international relations and will exacerbate humanitarian catastrophe in Syria.”

“Russia condemns in the strongest possible terms the attack against Syria, where Russian military personnel are assisting the legitimate government in its counterterrorism efforts,” he said in a statement.

Syrian television reported that Syria's air defenses, which are substantial, responded to the attack. Syrians poured into the streets for defiant demonstrations of their national pride.

Trump said the U.S. is prepared to sustain economic, diplomatic and military pressure on Assad until he ends what the president called a criminal pattern of killing his own people with internationally banned chemical weapons.

Assad tweeted on his official account following the strike that, "Good souls will not be humiliated." He vowed his country would respond to the strikes.

The Syria attack drew support from the European Union, Germany, Israel and other allies.

"We cannot tolerate the trivialization of chemical weapons, which is an immediate danger for the Syrian people and our collective security. This is the direction of the diplomatic initiatives put forward by France at the United Nations Security Council," he said.

British Prime Minister Theresa May said she "authorized British armed forces to conduct coordinated and targeted strikes to degrade the Syrian Regime’s chemical weapons capability and deter their use."

"The Syrian regime has a history of using chemical weapons against its own people in the most cruel and abhorrent way," May wrote in a statement.

"This is not about intervening in a civil war. It is not about regime change. It is about a limited and targeted strike that does not further escalate tensions in the region and that does everything possible to prevent civilian casualties. And while this action is specifically about deterring the Syrian regime, it will also send a clear signal to anyone else who believes they can use chemical weapons with impunity," she continued.

Gen. Joseph Dunford, chairman of the Joint Chiefs of Staff, said the U.S. did not coordinate targets with or notify the Russian government of the strikes, beyond normal airspace "de-confliction" communications.

Dunford said missiles first struck a scientific research center in the Damascus area that he said was a center of Syrian research, development, production and testing of chemical and biological warfare technology.

The second target was a chemical weapons storage facility west of Homs. He said this was believed to be the main site of Syrian sarin and precursor chemical production equipment. 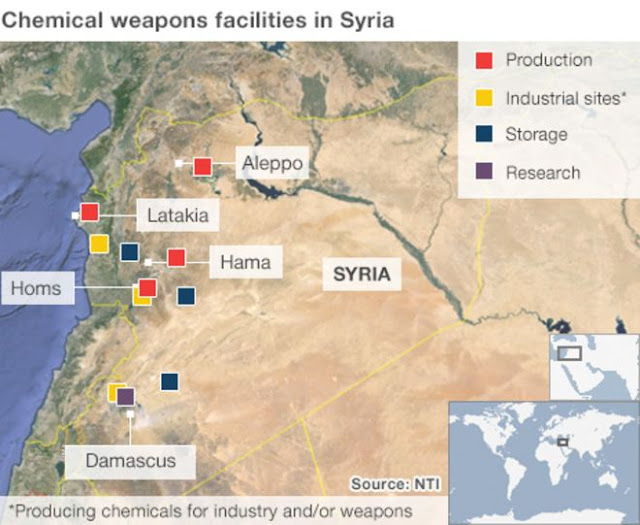 Trump said the U.S. is prepared to "sustain" pressure on Assad until he ends what the president called a criminal pattern of killing his own people with internationally banned chemical weapons.

At least 40 people died in the chemical attack in Douma last Saturday, about 10 miles east of Damascus, and more than 500 people, mostly women and children, were injured and brought to medical centers.

The attack occurred amid a resumed offensive by Syrian government forces after the collapse of a truce. Syrian activists, rescuers and medics said families suffocated in their homes.

Assad's actions, Trump said, "are not the actions of a man," but "are the crimes of a monster instead."

"The evil and the despicable attack left mothers and fathers, infants and children, thrashing in pain and gasping for air. These are not the actions of a man; they are crimes of a monster instead," Trump said.

A similar chemical attack in Khan Sheikhoun in April 2017 that killed nearly 100 people prompted the U.S. to launch dozens of cruise missiles at a Syrian airfield to dissuade Assad from using chemical weapons in the future, officials said. But during the weekend, images of dead and sick women and children again circulated following another alleged chemical attack.

Trump also hit Russia and Iran for their sustained support of the Assad regime.
"The nations of the world can be judged by the friends that they keep," he continued. "Russia must decide if it will continue down this dark path or continue with civilized nations."

http://www.foxnews.com/world/2018/04/14/us-warships-b-1-bombers-strike-against-assad-after-suspected-chemical-attack.html
Posted by Frances Rice at 10:55 AM