Mueller at the Crossroads 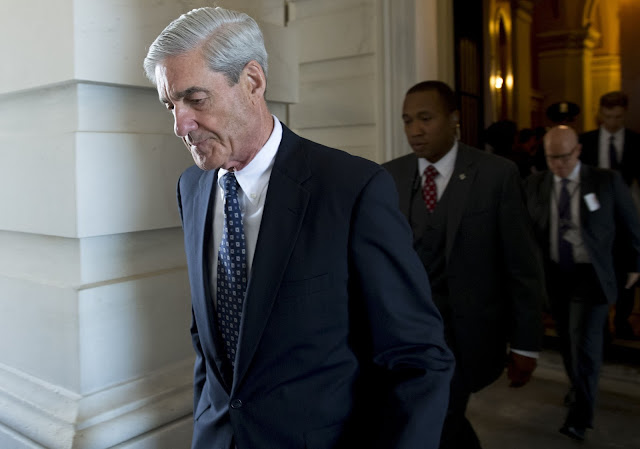 Robert Mueller was appointed special counsel in May 2017 in reaction to a media still gripped by near hysteria over the inexplicable defeat of Hillary Clinton in the 2016 presidential election.

For nearly a year before Mueller's appointment, leaks had spread about collusion between Russia and the Donald Trump campaign that supposedly cost Clinton a sure victory.

Most of these collusion stories, as we now know, originated with Christopher Steele and his now-discredited anti-Trump opposition file.

After almost a year, Mueller has offered no evidence that Trump colluded with the Russians.

Aside from former Trump campaign chairman Paul Manafort, a few minor and transitory campaign officials have been indicted or have pleaded guilty to a variety of transgressions other than collusion.

Ironically, the United States has often interfered in foreign elections to massage the result.

Recently, Bill Clinton joked about his own efforts as president to collude in the 1996 Israeli election to ensure the defeat of Benjamin Netanyahu. "I tried to do it in a way that didn't overtly involve me," Clinton said.

The Obama administration did the same in 2015, when it used State Department funds to support an anti-Netanyahu political action group.

Since Mueller's investigation began, a number of top FBI and Department of Justice officials have either retired, or were reassigned or fired.

With the exception of former FBI Director James Comey, all left their jobs due to investigations of improper conduct that took place during the 2016 election cycle. Most were under a cloud of suspicion for lying, having conflicts of interest or misleading investigators.

Mueller is reaching the crossroads of his investigation and faces at least four critical decisions.

One, Mueller can wind up his investigations now. He can write a report affirming that he has found no evidence while conducting his originally assigned inquiry: Donald Trump did not collude with the Russians to throw the election his way.

If Horowitz finds credible evidence of lawbreaking, then Mueller might seek indictments based on the IG's likely actionable evidence.

Three, Mueller could continue to investigate anyone close to the Trump campaign for another year.

If he did that, he would confirm that his inquiry has descended into a political cause. If Mueller calibrates the release of his findings to the fall midterm elections, he will be hailed by Trump opponents as a crusading prosecutor -- despite finding nothing related to collusion.

A Democratic takeover of Congress would shut down congressional investigations of FBI and DOJ wrongdoing and further empower Mueller.

Four, Mueller could more evenly apply his investigations of lying, obstruction of justice and collusion during the 2016 campaign. That way, he would reassure the country of equal treatment of all under the law.

For example, in his search for instances of lying, Mueller might also re-examine the false testimonies given to investigators by McCabe and by Clinton aides Cheryl Mills and Huma Abedin.

In his search for Russian collusion, Mueller might also investigate Steele, Glenn Simpson of Fusion GPS and the Clinton campaign. All used Russian sources to leak unproven gossip and smears to the press in an effort to warp the 2016 election.

In his search for obstruction of justice, Mueller might also investigate whether top DOJ and FBI officials deliberately misled the FISA Court before and during after the 2016 election cycle by withholding evidence that the Steele dossier was flawed.

Did Justice Department officials inform the FISA Court that Steele's dossier was hired research paid for by the Clinton campaign?

In his search for felonious behavior concerning the leaking of classified documents, Mueller might determine:

1) Whether the memos regarding presidential conversations that Comey leaked to the press were classified;

2) Whether former top national security and intelligence officials -- among them John Brennan, James Clapper, Samantha Power, Ben Rhodes and Susan Rice -- requested that the redacted names of surveilled Americans be unmasked, and whether officials then illegally leaked those names to the media;

3) Whether FBI officials such as Comey and McCabe leaked confidential findings from their investigations to the press during the 2016 campaign and lied to investigators about it.

If the special counsel's investigation has turned into a political cause, Mueller will no doubt prefer the third option. That is, Mueller's report (and possibly more indictments of minor campaign aides) would likely appear shortly before the midterm elections.

If Democrats win the House, then they will probably shut down all congressional investigations of the FBI and the DOJ -- and perhaps all reviews of the actions of Mueller himself.