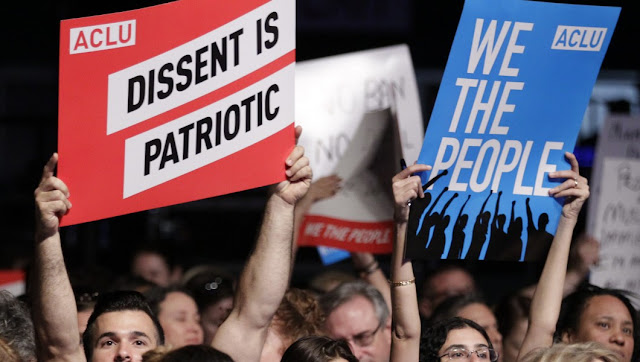 A group of people hold up signs during a meeting called "The Resistance Training" hosted by the American Civil Liberties Union on March 11, 2017 in Coral Gables, Fla.
(Luis M. Alvarez / AP)

The American Civil Liberties Union, on whose national board I used to serve with pride, raises vast sums of money claiming to defend the civil liberties of all Americans.

Unfortunately, however, over the last several years it has turned from being a neutral civil liberties organization to a left-wing, agenda-driven lobby group that protects its contributors and constituents while ignoring the civil liberties of Americans with whom it disagrees.

Sure, it occasionally defends a Nazi or Klansman as an easy pretend-show of its willingness to protect the free speech of the most despicable racists.

But it has been scandalously silent when it comes to the real current threats to civil liberties and free speech, especially on university campuses where the hard left demands suspension of free speech and due process rights for those with whom it disagrees.

Now, since the election of President Trump, it has sunk to a new low, becoming a cheerleader for the violation of the civil liberties of those on the other side of the political spectrum.

Consider the recent raid on the law office and hotel room of Trump’s lawyer, Michael Cohen.

In that raid, it appears as if FBI agents may well have seized material protected by the lawyer/client privilege, including communications between Trump and his attorney.

On the day of the raid, I said that if a similar raid had been conducted on Hillary Clinton, had she been elected and a Special Prosecutor appointed to investigate her emails, the ACLU would have been up in arms.

I condemned its doubled-standard silence. When I said that, I couldn’t possibly imagine that the ACLU would actually go out of its way to justify and defend the raid, even before all the facts were known.

But that is exactly what it has done. David Cole, who identifies himself as the ACLU Legal Director, said the organization relies on the good faith of the Justice Department, the FBI, and the judge who issued the warrant to assure all Americans that this raid on a lawyer’s office, is “a sign that the rule of law is alive.”

The ACLU acknowledges that material covered by the lawyer/client privilege will be shown to a “privilege team” – sometimes called a firewall or taint team.

This team consists of FBI agents and government lawyers who will get to read communications between lawyers and clients that are privileged, and not subject to any exceptions.

It is enough for the ACLU that these privileged communications will not be used in a criminal case against the client.

And imagine that government agents got to read the most intimate privileged communications between you, your lawyer, your doctor, your spouse or your priest.

Would it be enough that the government (and the ACLU) told you that the information wouldn’t be used in a criminal case against you?

Would you believe that your civil liberties had been violated as soon as government agents read this material?

Would you trust government agents not to leak embarrassing information about your conversations, especially if you were a controversial public figure?

The ACLU does not address any of these questions, because the person whose lawyer’s office was searched was Donald Trump. And virtually every contributor to the ACLU voted against Trump, as I did.

It is understandable in our hyper-partisan age that many Democrats, liberals, and leftists are so outraged at Trump that they are willing to ignore violations of his civil liberties, even if these violations establish a precedent for future use against all Americans.

It is inexcusable that the ACLU should ignore these potentially blatant violations of the right of privacy under the Fourth Amendment, the right to counsel and confidentiality under the Sixth Amendment. But for the ACLU, getting Trump trumps civil liberties.

It is precisely because the ACLU has abandoned its role as a neutral defender of civil liberties that I have had to speak up so loudly and repeatedly in opposition to the criminalization of political differences and to the violation of President Trump’s civil liberties.

I wish I didn’t have to, but the hyper-partisan nature of American life, reflected by the ACLU’s decision to justify potential intrusions into Trump’s Fourth and Sixth Amendment rights, makes it necessary for someone to take over the traditional role of the ACLU.

I hope others, both Democrats and Republicans, liberals and conservatives, will join me in protecting the civil liberties of all Americans.

Alan Dershowitz (@AlanDersh) is a contributor to the Washington Examiner's Beltway Confidential blog. He is the Felix Frankfurter Professor of Law, Emeritus, at Harvard Law School and author of "Trumped up! How Criminalizing Politics is Dangerous to Democracy." This article was originally published by The Hill.